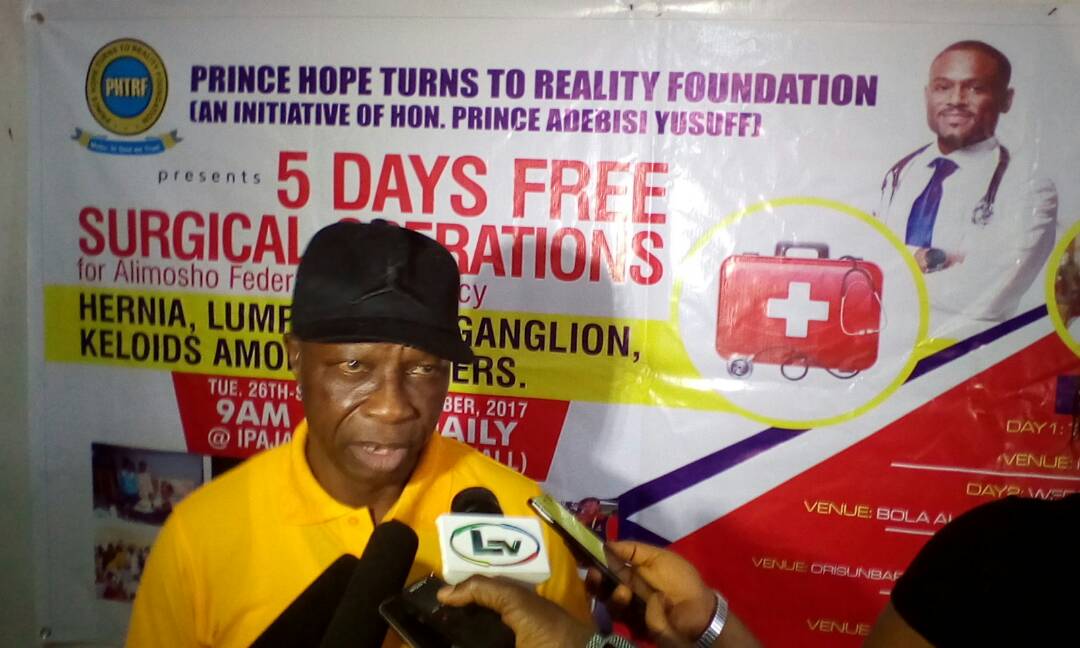 Share this on WhatsApp
Spread the love
Hon. Bisi Yusuff a representative of Alimosho constituency 1 in the Lagos State House of Assembly has facilitated surgical operations for over 400 constituents with varying health challenges.
The health remedial and surgical project is organised under aegis of Prince of Hope Turns To Reality Foundation (An initiative of Hon. Prince Bisi Yusuff).
According to the lawmaker the five-day project which commenced Tuesday 26 September will end Saturday 30 September at various locations.
In a chat with newsmen at the Ipaja mini- stadium,venue of the formal flag-off ceremony of the programme, Yusuff stated that it is an annual event that will last long. Adding that the gesture is borne out of God’s kindness towards him.
“I should also be very kind to the people around me. They radiate love around me, which is why they gave me their votes. I have to reciprocate.
“There are some people that have been living with stigma for years and I determined that if God spares my life every year, I should be able to help them by taking away their sorrow.
“It is not the amount of money you have in your bank account that matters, but the number of lives you are able to save. It is not the number of property you have that matters, which is why I try to save lives throughout the year,” he added.
Yusuff also noted that the applause that trailed the past health forum spurred him to continue,expressing his happiness over the massive turnout of people at the opening of the programme.
“They are beautiful facially, but inside them they are not happy. Somebody just have to make them happy. That is what I am doing. This is the only way I can be counted amongst those who add value to human lives. 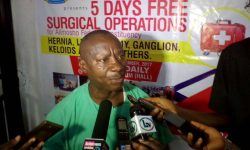 “It is not healthcare alone, I understand what education means. I uplift the educational standard of our people every year. Some people have been living with a particular sickness for years. God has given me good health and I have to reciprocate that.”
He however, revealed that the government has not supported him in any way, adding that ideas generates wealth.
Yusuff recalled that a young man, who attended the programme from the United States of America last year was following the crew everywhere unknowingly to them.
“He now came back to tell us that he had been looking for people to support in Africa, and that honest people are very difficult to find. “Now, the man has come from the US and he brought five surgeons with him. Next year, by the grace of God, we are shipping medical equipment to my constituency.
“My children are sponsoring the projects, they are my backers. I also established a health committee headed by Mr.  Adebisi Francis, the Vice Chairman of Alimosho Local Government, Hon. Agbaje, Dele and so many of them.
“They have seen what is good in it. We are committed to alleviating the sufferings of the people,” he said.
Going down memory lane, Yusuff stated that he started the project before he became a lawmaker, and that he established five public health centres as the Chairman of Ayobo/Ipaja Local Council Development Area.
The politician, who said that 30 surgeons would partake in the project this year, revealed that the free healthcare programme is open to people from all over the state and even beyond, adding that people came from Ekiti and Ondo States last year, and that some people from Ogun State and others would benefit from this year’s programme.
Also speaking, Dr. Oladokun Samson Alaba, a surgeon, who led the medical team, promised that they were fully on ground, and that 10 surgeons were already on ground and that more were still being expected.
“We are general surgeons. I am a neurologist, I deal with kidney, prostate and other parts of the body.
“If you are a surgeon, you would have a basic surgical knowledge, you can do it. We believe that by Saturday we would have performed surgery for about 400 people.
“We are not going to attack dangerous cases such as goitre and major surgeries. We deal with keloid, hernia, lumpectomy, ganglion and others.
“We are ready to deal with many sicknesses, but the patients must follow instructions. It is a volunteer kind of job, we are doing it to support Hon. Bisi Yusuf and his Hope Turns Into Reality Project to help the less privileged,” he said.
A beneficiary, whose twins have abnormal features and who gave her name as Adenike, revealed that she had been billed N2 million in the hospital, which she could not afford.
Adenike stated that the father of the boys and his family members abandoned her and the children, saying that she begged to feed the children as a poor hairdresser.
She stated that she was invited to the programme by Hon. Bisi Yusuff, who had promised to help her operate the children free of charge.
Others such as Mr. Gbolahan Oyekan, whose son Lekan, had appendicitis, Nike Babalola, who required brain surgery and Mr. Onilufe Hafeez with a severe keloid, thanked Bisi Yusuff for the gesture as they looked forward to successful surgeries.
Share this on WhatsApp
Related Topics:Hon. Bisi Yusufflagos state house of assemblysurgical operations
Up Next