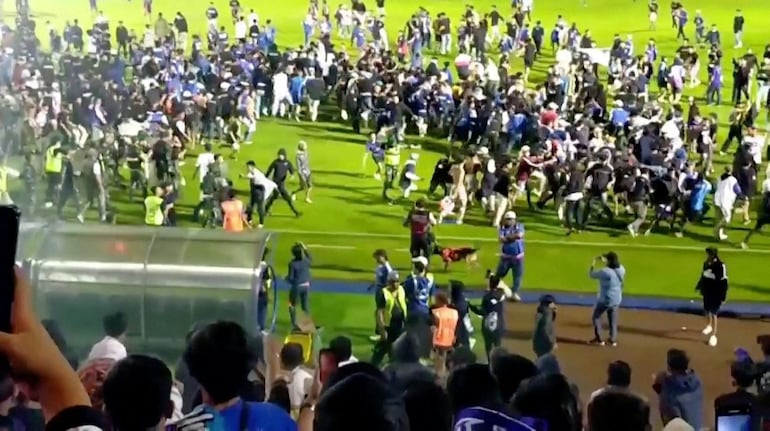 Indonesian authorities have revealed that not less than 174 people were killed and about 180 others injured when a riot broke out during a league football game at the East Java stadium.

According to East Java police chief Nico Afinta, the riot broke out when “frustrated supporters of the losing home team invaded the pitch in Malang in the province, leading to security officers firing tear gas in an attempt to control the situation, triggering the stampede and cases of suffocation.”

“It had gotten anarchic. They started attacking officers, they damaged cars. Much of the crush occurred when fans fled for an exit gate,” Nico said.

Local media reports that the riot was triggered when fans of the home team Arema FC, which was losing 3-2 to their visitors, Persebaya Surabaya FC, invaded the pitch and began attacking match officials and players of the opposing team.

After struggling unsuccessfully to control the crowd, security officials resorted to firing teargas to disperse the crowd.

The head of one of the hospitals in the area treating patients said some of the victims had sustained brain injuries and that the fatalities included a five-year-old child.

Reacting to the tragedy, Indonesian President Joko Widodo said authorities must thoroughly evaluate security at matches, adding that he hoped this would be “the last soccer tragedy in the nation.”

Widodo ordered the Football Association of Indonesia to suspend all games in the Indonesian top league BRI Liga 1 until an investigation had been completed.

The Malang stadium disaster is the second deadliest since 1964, when 328 people died during a riot when Perú hosted Argentina at the Estadio Nacional.

Indonesia which is scheduled to host the FIFA under-20 World Cup in May and June next year will now come under serious scrutiny as world’s football governing body, FIFA, has sent a team to Malang to investigate the incident.