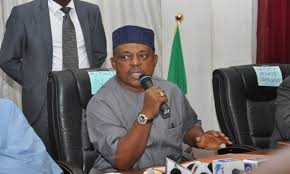 Few days after a splinter group emerged from the PDP, a party chieftain has asked the federal high court, Abuja, to nullify the election of Aribisala Adewale and Diran Odeyemi as the National Treasurer and Deputy National Publicity Secretary. The duo of Odeyemi and Aribisala, and other officials of the party, were elected at the PDP’s December 9 convention.

Pegba Otemolu, who is the plaintiff, claims Aribisala and Odeyemi were not duly sponsored by the party organ in the South-West to contest for the election, which they won. He further said that their nomination and election violated an earlier judgment of the court delivered on June 24, 2016. Otemolu frowned at the rejection of a South-West party delegate list from his group submitted to the convention organisers.

He contends that he is PDP’s zonal secretary in the South-West, having been elected for tenure of four years.

In his affidavits before the court, Otemolu said a south-west zonal executive of the party, which he is part of, is the valid and authentic executive committee until their tenure expires”. Based on this, Otemolu his group is “the Executive Committee to be accepted and recognized for any purpose on issues relating to the South-West Executive Committee”.

According to its petition, wants the court to declare Chief Folorunsho Babalola and Bamidele Salam respectively as the Treasurer and Deputy National Secretary of the 1st defendant.

Otemolu is asking the party to substitute Aribisala and Odeyemi with Folorunsho Babalola and Bamidele Salam, who are to take the latters’ posts.

The defendants in the case are the PDP, INEC, Odeyemi and Aribisala, however no date has been fixed for the hearing.