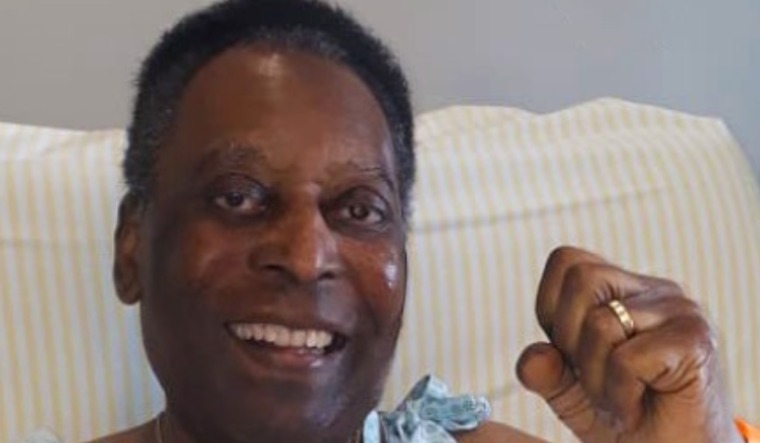 Brazilian football legend Pele ‘has been moved to palliative care’ in hospital and is ‘no longer responding to chemotherapy’ in his fight against bowel cancer.

Reports in Brazil said the 82-year-old, who went into hospital last week, is receiving measures to relieve pain in an ‘end-of-life palliative care’ ward.

His former club Santos, Brazilian ex-player Rivaldo and the France international forward Kylian Mbappe were among those tweeting good wishes, joining fans around the world.

England captain Harry Kane said: ‘We send our best wishes to him and all his family from the whole England set-up. He’s an inspiration, an incredible person.’

He was admitted into the Albert Einstein Hospital in Sao Paulo, Brazil on Tuesday suffering from ‘general swelling’ and ‘heart failure’.

An update on Thursday said the three-time World Cup winner was in a ‘stable’ condition in the hospital with his daughter Kely insisting there was ‘no cause for alarm’.

However, a report by Folha de Sao Paulo on Saturday, said Pele isn’t responding any longer to the chemotherapy treatment he has been undergoing since last September to treat his bowel cancer.

READ ALSO: Pele in stable condition after admission to hospital

They said he is now in palliative care and won’t be subjected to invasive tests or treatment. Palliative care is for patients with potentially life-threatening diseases or conditions and end-of-life care.

Pele – whose full name is Edson Arantes do Nascimento – is regarded by many as the greatest footballer of all time.

Speaking at the start of the BBC’s coverage of the Netherlands vs United States World Cup game, German legend Jurgen Klinsmann said of Pele: ‘He is always nice to every fan walking up to him and obviously he is Pele, the outstanding personality of world football.

‘Obviously this is very, very sad news and let’s just pray for him and hope for the best. But it is sad news.’