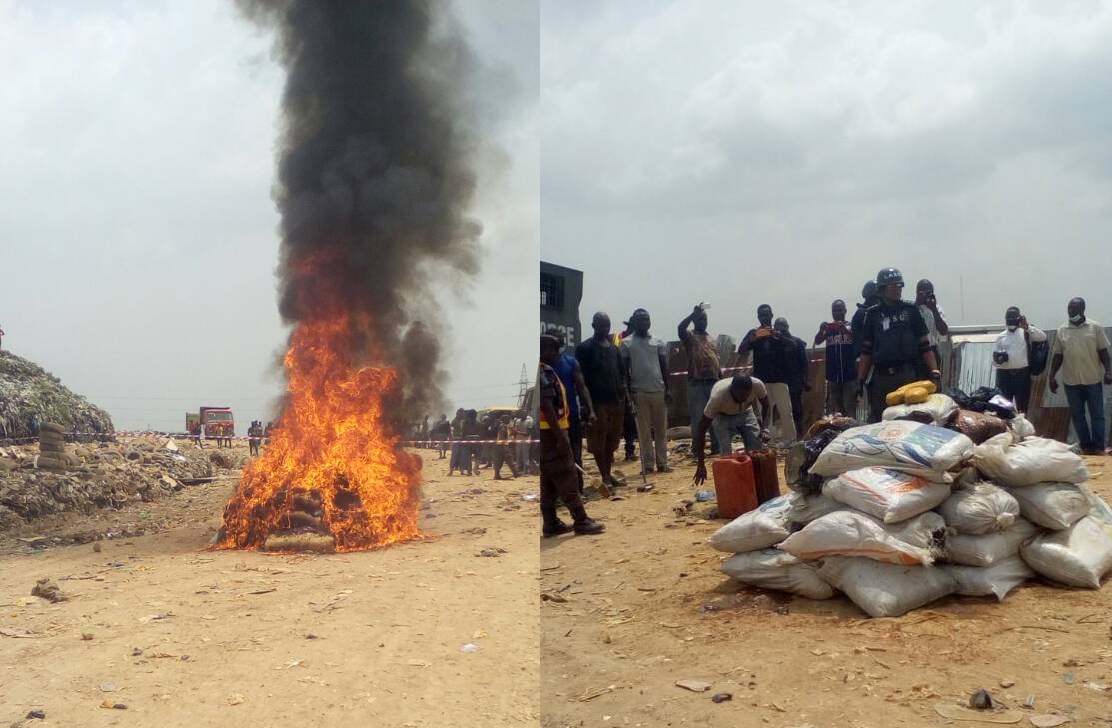 Lagos state police command has openly destroyed hard drugs worth over N50million in the state.

The Lagos state Commissioner of Police Edgal Imohimi, who led policemen and Lagos state Task Force on Environment and Special Offences Unit among other security agencies, burnt the drugs at the Olusosun dumpsite at Ojota area of the state.

Edgal said that the command have zero tolerance for hard drugs. He decried the rising cases of hard drugs usage among the youth as the hard drugs intake fuels crime , cultism, youth restiveness and other deviant behaviour.

Speaking further, “You will recall that during my town hall meetings, I said that as long as I am the commissioner of police Lagos state command, we must rid our community of hard drugs, drug peddlers and take back our streets from these people.

“I have instructed my officers to carry out series of operations to recover hard drugs anywhere they are being sold and arrest those selling the drugs and prosecute them.

“In line with with the court order today, we are openly destroying these drugs siezed which have an estimated street value of over N50million”.

Speaking on the danger of hard drugs, Imohimi said “These drugs are very dangerous. Some of them are called Arizona, Knoch, and there is also another one called Codine. More worrisome about codine is that our youth can get it over the counter and in the pharmacy.

“I am using this opportunity to call on pharmacists and other professionals that drugs like codine must not be dispensed without a doctor’s prescription.

National Daily gathered that the Commissioner has vowed to sustain the clampdown on drugs with a view to cutting out all the points these youth access to these illicit drugs on the street.

He further explained that there was a strong correlation between hard drugs, crime and deviant behaviour. “We must take back our neighbourhood from drug peddlers. We must all join hands to take our neighbourhood back.

“We have over 56 suspects arrested at the Alaska area of the state. Some of them have been charged to court. We will not allow drugs to be sold on our streets anymore,” CP Edgal reiterated.

Share this on WhatsApp
Related Topics:ArizonaCodineCommissioner of PoliceCP Edgal ImohimiHard DrugsKnochTask Force on Environment and Special Offences Unit
Up Next