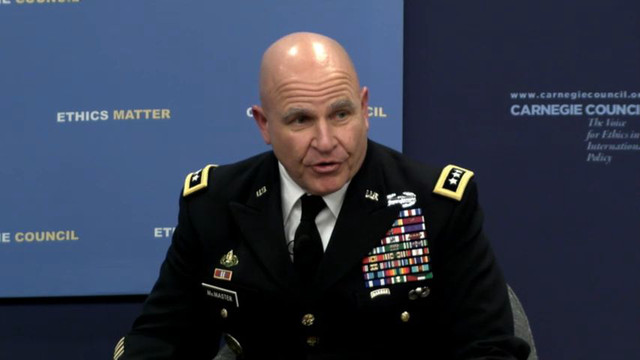 Share this on WhatsApp
Spread the love
The United States President, Donald Trump, has appointed Lt Gen Herbert Raymond McMaster as the new National Security Adviser a week after the former NSA, Michael Flynn resigned.
Lt Gen Michael Flynn resigned on controversial ground after he was linked with having a conversation with Russian Ambassador on sanction against his country.
He was in office for three weeks and three days.
Mcmaster has worked in various capacity in the US Army. He also served in Iraq during the Gulf War and Afghanistan, where he worked on a government anti-corruption drive.
Describing the new NSA as “a man of tremendous talent and tremendous experience”, Trump added that he is “highly respected by everybody in the military”.
Mcmaster is a PhD in US history from the University of North Carolina and he was said to have criticised the US military’s involvement in the Vietnam War in his book: Dereliction of Duty.
Defence analysts are of the view that with his appointment, considering his wealth of experience in the theatre of war, he would bring drastic changes and improvement in the war against terrorism especially decapitating ISIS.
Share this on WhatsApp