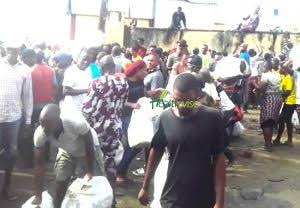 Protesters on Wednesday discovered food items sent to Lagos State by the Federal Government as interventionist palliatives for the Covid 19 lockdown in Nigeria. The food items were hidden in three warehouses at Monkey Village in the neighbourhood of Agboju Amuwo and Alakija.

On the discovery, residents have been trooping to the warehouses to take away the hidden food items according to their needs. The items include rice, indomie, flour, etc.

According to people at the warehouses, thousands have gone there to carry the food items and one warehouse has not gone half.

This is the wickedness of the Nigerian politicians. Someone hiding interventionist palliatives at a time Nigerians were dying of hunger and were not allowed to move.

The federal government had announced the distribution of palliatives to states but they didn’t get to citizens. Accordingly, many people did not believe President Muhammadu Buhari or the Minister of Humanitarian Affairs.

Those at the warehouse disclosed that the hidden palliatives can serve citizens in three local governments. 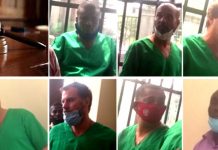