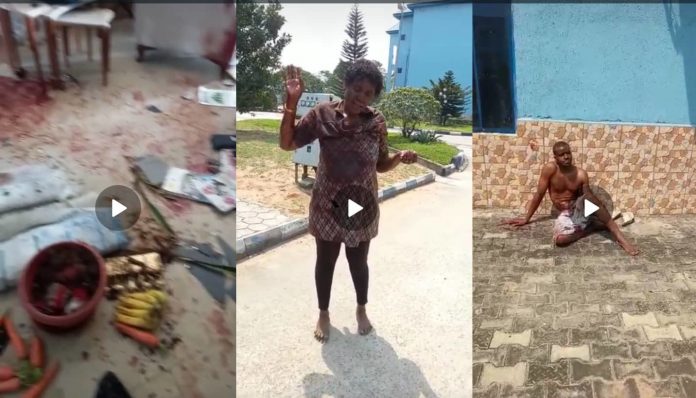 Although he is playing dumb now, Jachi Mbachu has landed in trouble after failing in his attempt to sacrifice his mother for money rituals.

Videos of the bloody scene already circulating on the Internet show an apartment littered with household utensils, carrots, strawberries, flowers, and broken pieces of furniture.

It appeared the mother slogged it out with her son inside their flat in Heroes Apartment, Owerri, Imo, fighting her way through window panes and frames.

Blood was splattered on the floors, walls, and furniture.

“The guy wanted to kill her mum for rituals. He had a mission,” voices commented in the background.

The mother, too, stood outside thanking God and the Holy Spirit for rescuing her. Her scanty blouse had blood stains, and her hands and arms also bore marks of laceration and blood.

Mbach also appeared in the video, tongue-tied where he sat in front of a building in the estate.

He refused to respond to questions the by-standers asked.

And some of the people concluded the failed ritual had backfired, leading to his dumbness.