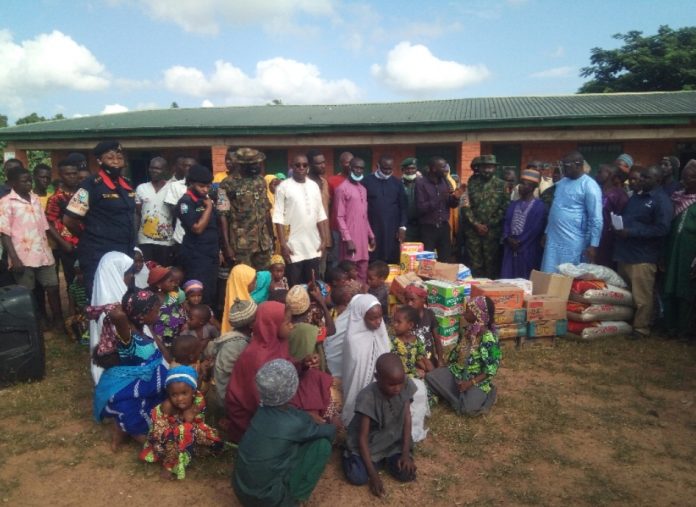 Share this on WhatsApp
Spread the love
By Kingsley Chukwuka, Jos
The Internally Displaced Persons (IDPs), who were displaced as a result of the crisis that recently bedeviled Southern Kaduna, have received palliatives from the Operation Safe Haven (OPSH), saddled with the responsibility to restore peace in the region.
The IDPs who were elated to to see men in uniform donating food items and sanitaries, said their hope was rekindled in the mist of untold hardship faced in the camp.
Their hope was further boosted when the Taskforce Commander, Maj. Gen. Chukwuemeka Okonkwo, assured them that their stay as IDPs will soon be short lived, as discussions are on going to resettle them back to their villages.
“We are holding peace talk with relevant stakeholders from your communities and very soon we will return you all back to your villages with adequate security. The gesture you see today is our efforts through Civil Military Relations from the Defence Headquarters”, the Army boss said.
Earlier, Okonkwo had addressed youths at a summit tagged Peace and Reconciliation held at Zangon Kataf Local Government Area of the State.
While speaking at the summit he charged stakeholders to put an end to the circle of violence, adding that tolerance is a vital tool to peace.
“This conflict is bedeviled with ethnic dimension, but sheath your sword and make concious efforts to see each other as one.
“We also solicit for accurate and timely  information to enable us respond promptly to during attacks”, Okonkwo said.
Our correspondent reports that palliatives were distributed to two separate IDPs, one to the natives and the other to the Fulani’s all in Zangon Kataf LGA.
Share this on WhatsApp