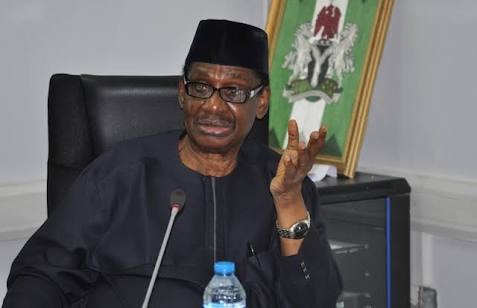 The Senate on Thursday took aim at Professor Itse Sagay, describing him a rascal and sadist for painting the legislators as corrupt and antagonists of the federal government’s anti-corruption fight.

Sagay, in a lecture he gave recently had said each Nigerian senator earns higher annual salary than the president of the United States. He also accused the National Assembly of sabotaging the fight against corruption in Nigeria.

Aliyu Sabi Abdullahi, spokesman for the senate in a statement on Thursday called on the President to caution Sagay and stop him from further creating needless tension in the relationship between the executive and the legislature.

He said Senators salaries and allowances are open books and the details can be taken from the RMFAC by any interested party.

“As an academic whose creed should be to find facts and make comments based on truth, we believe that Sagay should stop spreading beer parlour rumours about the salaries and allowances of legislators when he could simply get the facts from the Revenue Mobilization and Fiscal Allocation Commission (RMFAC) which is the body constitutionally charged with the responsibility of fixing salaries and allowances of all public officials.”

“Prof. Sagay at his lecture in Lagos also made comparisons which did little credit to his background as a lecturer as he was talking of the salary of the United States President and that of a Nigerian legislator. That is like comparing oranges with apples. Only a senile, jaded, rustic and outdated Professor of Law like Sagay will make such a comparison which falls flat on its face, even to an ordinary lay man.

Surely, Sagay is basing his analysis on street talks.

“Sagay could not even check the records before proclaiming that “the National Assembly has not passed a single bill for the promotion of anti-corruption war since it commenced business in July 2015”.

First, the 8th National Assembly was inaugurated on June 9, 2015 not July. Also, it is on record that the Senate has passed the Whistle Blowers’ Protection Bill, Witness Protection Bill, Mutual Legal Assistance in Criminal Matters Bill and the Nigerian Financial Intelligence Agency Bill.

“This man talks like a man who is constantly under the influence of some substance and perhaps possessed as he employs the language of a tout with no civility. He is probably constantly excited and incensed by the fact of having his first opportunity to find himself in the corridors of power.

” He pontificates and talks as if the war against corruption of the Buhari administration depends solely on him to survive. He once publicly attacked the Attorney General of the Federation and accused him of not doing enough to prosecute the war. In the Lagos speech, he took a blanket swipe at the judiciary and rubbished that entire institution which he as a lawyer has the professional, ethical and constitutional duty to respect.”