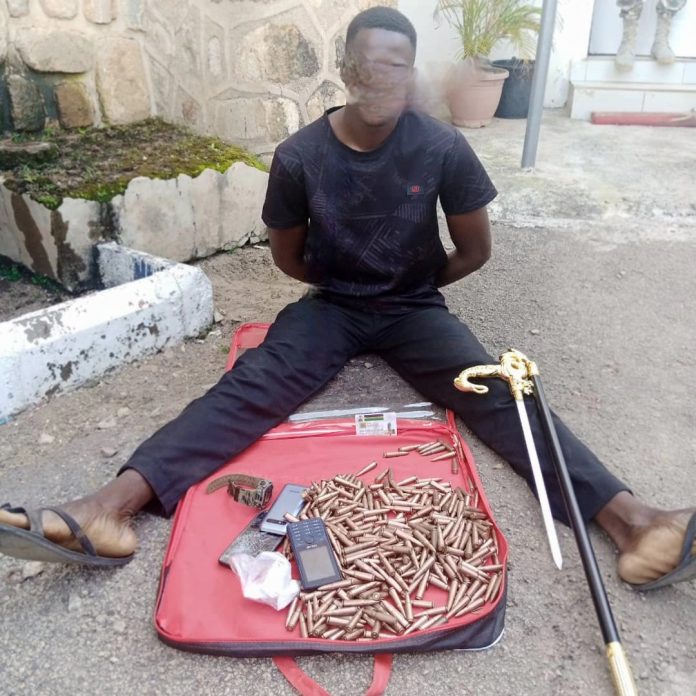 A car conveying some gunrunners tried to outsmart soldiers manning a checkpoint Werreng along Barkin Ladi, Jos,Plateau. The car then smashed into a barricade, killing one of its occupants on Thursday.

Troops of Operation SAFE HAVEN (OPSH) manning the checkpoint then knew something more was afoot.

According to Major Ishaku Takwa, Military Information Officer, of the operation, a preliminary investigation revealed that one of them is Sergeant Azi Jonathan, a 30-year old police traffic warden.

He was trafficking a cache of ammunition, including N205,070, one empty case of ammunition, one dagger, a torchlight, 3 Techno phones, national identity card, 3 wraps of cannabis and a bag containing clothing materials.

His body has been handed over to the Police Divisional Headquarters at Barkin Ladi, while Jonathan is undergoing further interrogation.

The Commander OPSH, Major General Ibrahim Ali has commended the troops for their vigilance.

Jos has been in the grip of bandits, including Fulani herdsmen and terrorists killing and kidnapping, and launching reprisals.

Weeks ago, some bandits killed busloads of Bauchi citizens passing through the area to Ondo state.

The military has been intercepting non-state actors wielding and trafficking arms and ammunition to the area.