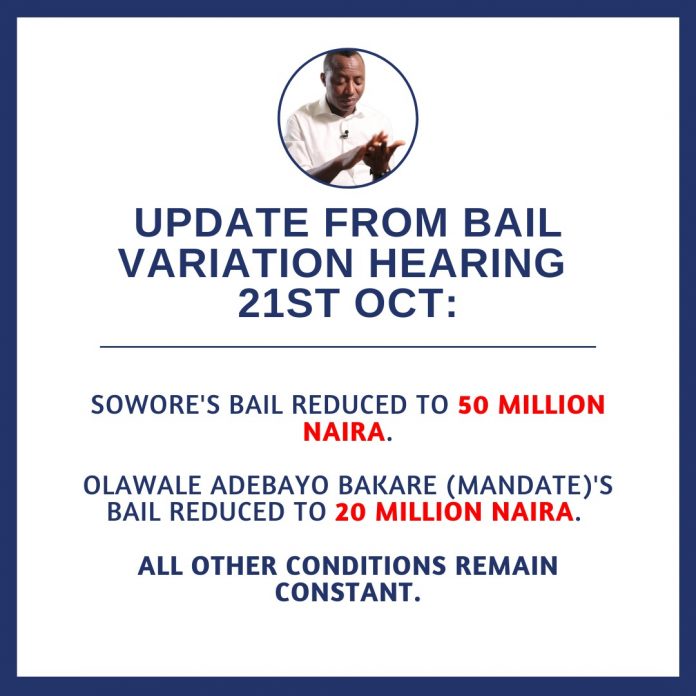 It was gathered that the prosecuting counsel made counter argument that the application for bail variation has no valid affidavit with it, claiming that the facts contained in the affidavit are derived from information secured from Sowore.

The prosecution counsel had further argued that Akin Sowore, who is to stand as surety for the defendant was never at the DSS facility. It was gathered that the defence counsel, at this point interjected to say that the claim was incorrect, stating that Akin Sowore was, in fact, at the DSS facility on the 8th of October. The prosecuting counsel was said to have requested Sowore’s lawyer prove this to be true.

The prosecution counsel further requested the judge to dismiss the application as there is no valid affidavit to back it up; saying that the enclosed affidavit had not given serious reason why the application should be varied apart from Sowore being a lecturer in the US, a claim, he said, has no proof of [there is ample, irrefutable proof of this fact].

The prosecuting attorney stated that even if there is a valid affidavit, the Judge must still note that all cases quoted by Falana have no relationship with the prosecution of Sowore. The prosecution counsel made reference that when Ibori was granted bail, he met the conditions. He noted that it was only when he needed the passport to travel, that he appealed but insisted that Ibori met the conditions first.

“If your freedom of expression will hamper on national security, the court has the right to withhold such,” the prosecution counsel had declared.

Falana had argued that the fact that Sowore is a lecturer was not challenged; he demanded the Prosecuting counsel to apologise to the court for the statement that Justice Taiwo Taiwo’s order had been taken over by events.

Falana noted that Section 45 deals with Nigeria’s national security; arguing that it is the court that decides what is a threat to national security and not the government.  Falana maintained that Sowore using the term “Revolution” has nothing to do with national security, declaring that even President Buhari had used it severally and he was not challenged, adding, a fact that had been raised in this same case.

Falana maintained that he did not need swear an affidavit as the lawyer who accompanied Sowore’s surety, Akin Sowore, to the DSS facility, insisting that Marshal Abubakar had done so already.

The Judge took the briefs of all the counsels.