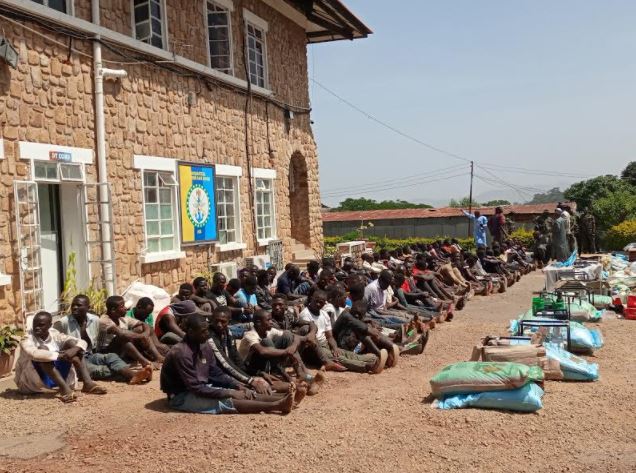 Share this on WhatsApp
By Kingsley Chukwuka, Jos
The Special Military Task Force in Plateau State otherwise known Operations Safe Haven (OPSH), on Sunday arrested over 150 hoodlums who defiled the curfew imposed by the Plateau State Government to loot government and private properties.
Parading the suspects in Jos, the STF Commander, Major General Chukwuemeka Okonkwo said the hoodlums were caught carting away items belonging to the Plateau State Agricultural and Development Programme (PADP).
“The bandits will be handed over the Police for procecution. We will not sit and watch them distroy this country. EndSARS is over, this once are criminals he said.
Our Correspondent reports that pumping machines, bags of fertilisers, pesticides, and other agricultural products meant for farmers were recovered from the bandits.
It would be recalled that hoodlums took the streets on Saturday in search of wearhouses where palliatives meant for COVID-19 were kept.
Discovering two of the wearhouses, they looted and carted away all the items stored therein and went in search for more.
The act which became untrollable led to the imposition of 24 hours curfew which had earlier been relaxed from 6am to 8pm.
Share this on WhatsApp