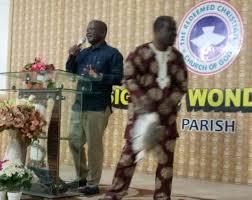 While on the altar during a special thanksgiving after the Supreme Court upheld his election victory, Benue Governor Samuel Ortom had a mysterious experience: an owl dove into the Redeemed Church of God parish, Markurdi, and flew straight to the governor.

According to a parishioner, Tordue Abe, the bird found its way into the Church, went straight to the altar where Ortom was kneeling down for his testimonies.

“On sighting the governor, the owl bowed, and together we rushed and killed it.

“Whatever it was they planned against the Governor, the Holy Spirit brought it to a halt.

“Indeed Governor Ortom is not just a man of God but a powerful man of God,” Abe said.

The owl is a nocturnal bird many Africans believe is an augury of evil.

The avian attack has however turned Ortom into a legend of sorts.

The apex court in its judgement upholding Ortom’s victory said the tribunal decision should be left undisturbed.