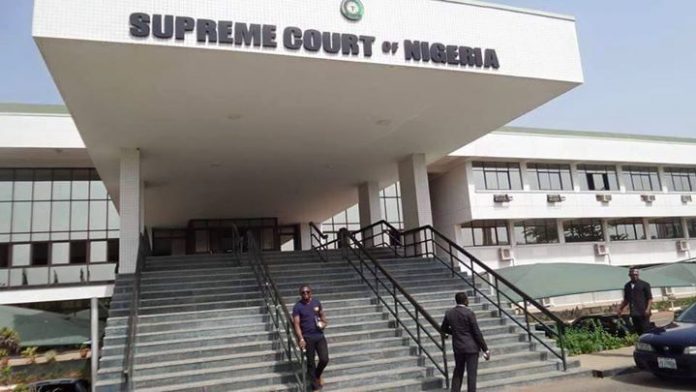 The Supreme Court has rejected a request for it to review its May 24, 2019 judgment voiding the participation of the All Progressives Congress (APC) and its candidates in the last elections in Zamfara State.

A five-man panel of the court, led by Justice Olabode Rhodes-Vivour, in a ruling yesterday morning, struck out an application marked: SC/377/2019 filed by the APC, seeking a review of the judgment.

The court rejected effort by the lawyer to the APC, Robert Clarke (SAN), to make it take a second look at the judgment, but proceeded to strike out the application filed to that effect by the APC and Inuwa Abdulkadir (1st National Vice Chairman, North West Zone of the APC).

Respondents to the application included Senator Kabiru Garba Marafa, Sirajo Garba (listed as the first and second respondents), the Independent National Electoral Commission (INEC; listed as the 179th respondent) and 176 others.

At the mention of the case, Clarke informed the court about the pending application by his clients for the court to take a second look at its earlier judgment, particularly the consequential order, which gave the victory recorded by the APC in the last general election in the state to the People’s Democratic Party (PDP), which came second.

Lawyer to some of the respondents, Benson Igbanoi said he needed time to respond to the application because it was served on him the previous Friday.

Before the court could take a final position on how to proceed with the case, some members of the five-man panel of the court observed some inadequacies in the procedure adopted by the applicants, noting that the application was intended for the court to review its earlier decision, without providing a valid basis for such exercise.

Justices John Okoro and Amiru Sanusi noted that since the case, on which the earlier judgment was given, was a pre-election case for which the Constitution allows the Supreme Court 60 days to determine, the court no longer has jurisdiction to revisit the case, having given its judgment.

The judge added that since the 60 days within which the court was to determine pre-election cases has elapsed, the court no longer has jurisdiction to take any further steps.

“If all the necessary documents that are supposed to have been brought are not brought, then the application is incompetent. The appellant only filed an appeal on only the lead judgment, leaving the judgment by other members of the panel.

“The Supreme Court has no jurisdiction over the matter because anything that has to do with pre-election matter must be brought within 60 days after a decision had been delivered,’’ he said.

Justice Rhodes-Vivour also held that the consequential order made was part of the pre-election matter and it was an abuse asking the apex court to review its judgment or orders.

“We don’t seat on appeal over our own decision. We have no jurisdiction over this matter,’’ Justice Rhodes-Vivour declared.

He thereafter proceeded to strike out the application.

The APC had, in the application, prayed the court for “an order to review, amend, correct and or set aside the consequential order made by this court in its judgment in appeal No: SC/377/2019 delivered on Friday, the 24th day of May, 2019, particularly the consequential order ‘that candidates of the parties, other than the first appellant, with the highest votes and the required spread stand elected to the various offices that were contested for in Zamfara State in the 2019 general elections’ and in its place, a consequential order that a fresh election be conducted by the 179th respondent, the Independent National Electoral Commission (INEC) within the time specified into all the various elective positions in Zamfara State.”

The applicants had, in support of the application, argued that Justices of the Supreme Court failed to take into consideration the provision of Section 77(2), 117(2), 132(5) and 187(5) of the 1999 Constitution of the Federal Republic of Nigeria, Article 13 of the African Charter on Human and Peoples Rights and the numerous extant decided in Garo v. Gwarzo (2008) 1LRECN p.297, paras C-E, among others.

They argued that “at the hearing of and as manifested in the lead judgment, the Supreme Court completely disregarded the extant judgment of the Zamfara State High Court in suit No: ZMS/GS/52/2018, which gave legality to both the first applicant/appellant (APC) to present its candidates to the 179th respondent (INEC) and for the 179th respondent to conduct elections into the various elective offices in Zamfara State.

“The consequential order made by this court in this appeal has made non-parties to the appeal to unjustifiably benefit from the outcome of the appeal contrary to the age-long decided authorities by this same court.”