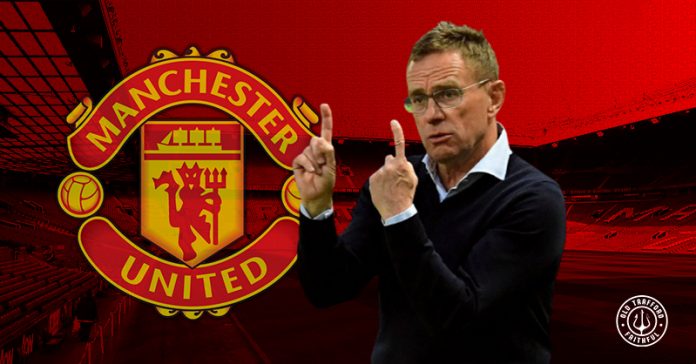 Manchester United only confirmed the appointment of Ralf Rangnick as boss on Monday following the sacking of their erstwhile manager Ole Gunnar Solskjaer recently.

The 63-year-old German is due to resume at Old Trafford but his arrival in Manchester has been delayed while he awaits his work permit.

The Red Devils will be hopeful to have their new boss in charge when they host Arsenal on Thursday or at the latest on Sunday when they host Crystal Palace.

Meanwhile, reports reaching National Daily claims that the new United boss has just suffered his first transfer blow as he is unlikely to arrive Old Trafford with his long-term assistant Lars Kornetka.

Kornetka, who had previously worked with Rangnick at Hoffenheim, Schalke and RB Leibzig before joining the 63-year-old at Lokomotiv Moscow earlier this year has been described as ‘the best video analyst in Germany, a friend and a colleague by the new United boss.

It will definitely be a big blow for the new Red Devils boss if the 43-year-old Korntka who has been tipped to be the first choice to serve as his assistant in Manchester ends up rejecting the move to Old Trafford.

Meanwhile, National Daily further gathered that the Russian side Lokomotiv have announced that Kornetka will remain with them to replace Rangnick as their new head of sport and development.

Further reports have also suggested that United will allow Rangnick to bring in a small number of his own staff in the coming days and with the Red Devils expected to retain much of Ole Gunnar Solskjaer’s backroom team including Michael Carrick, assistant Mike Phelan, coach Kieran McKenna and the goalkeeping coach Richard Hartis.