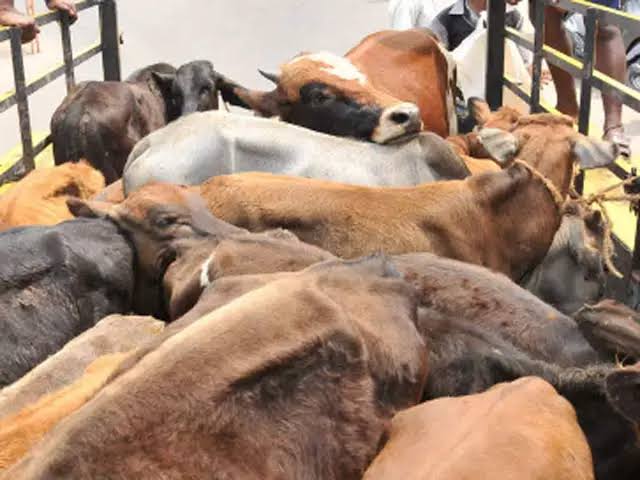 There is palpable tension in Rivers state following the seizure of cows and trucks from the Hausa community in the state for violating the state’s total lockdown put in place to curb the spread of coronavirus in the state.

It would be recalled that the state governor, Nyesome Wike had impounded two trailers loaded with cows and heading for Port Harcourt, the state capital, despite the 24-hour lockdown to check the Coronavirus pandemic in the capital city.

The Governor also arrested 14 persons in the two trailers conveying the cattle from Adamawa State to Port Harcourt.

Anger over the decision of the governor, the Hausa community in the state instituted a N100 million suit against the Nyesom Wike, and the State Government at a Federal High Court sitting in Port Harcourt over the seizure of cows and trucks.

The Federal High Court Harcourt presided over by Justice E.O. Obile, has fixed June 1, 2020 to hear the substantive suit filed by the Northern Community.

At resumed hearing, the Northern Community is demanding the sum of N100,000,000 as compensation for the arrest of their kinsmen who were in the state on a business trip alongside their cows and trucks.

Justice E.O. Obile said the Court fixed the date to allow the Plaintiff to put Wike and the state government on notice over the case.

Counsel for the arrested Northerners, Eze Kpaniku, claimed that Wike erred in arresting the Northerners, adding that they had waivers from the Federal Government for interstate movements to distribute the Agricultural products.

Kpaniku also lamented that both his clients and their cows have been arrested and dumped at the Isolation centre without food and medication for days.

Meanwhile, Leader of Northern Community in Rivers State, Alhaji Musa Saidu, demanded for the unconditional release of the arrested persons.

He said the Hausa community is the worst hit in the lockdown in Port Harcourt as most of their members have been arrested and detained at the isolation Centre.

The governor said that the cows and the trailers would be auctioned, explaining that a tip-off from some persons led to the arrest.