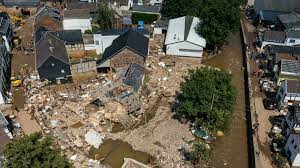 The head of Germany’s national disaster management agency has admitted problems with its warning systems after the devastating floods in western Germany.

“The tragedy can’t be properly described in words,’’ the head of the Federal Office for Civil Protection and Disaster Assistance (BBK), Armin Schuster, said on broadcaster ARD on Thursday.

When it came to the warning system, he said: “it didn’t go optimally.

“My office has a lot of know-how and little jurisdiction. We only press the warning button in the event of war,’’ Schuster said.

He referred to the fact that the Federal Government was only responsible for civil protection in the event of a national conflict.

“Otherwise, we make our system available to the states and municipalities and they use it,’’ he explained.

The question now is, how to improve the warning system, for example with more sirens and warnings via SMS to mobiles, he asked.

Interior Minister Horst Seehofer (CSU) had already decided in principle that the warnings could come via SMS, which would mean sending to all recipients who were in cell tower range at the time.

The Cabinet approved an emergency aid package worth hundreds of millions of euros on Wednesday after the floods had claimed more than 170 lives.

About a week after the massive floods, people in the affected areas in western Germany were concerned over the weather forecast for the weekend.

Showery rain and thunderstorms were expected in Rhineland-Palatinate and also in Saarland.