OBJECTS of desire come at a cost. Only bad things, like toxic waste, have a negative price, the equivalent of a fee payable to anyone willing to make them disappear. Does this mean that negative interest rates embody a new perspective on money that it has gone “bad”?
In market economies, money is the measure of the value of goods and services. And the interest rate is the price of that metric of money itself. When the price is zero, it makes no difference whether money is kept under a mattress or lent, because there is no cost to holding or borrowing cash.

But how can the price of money which, after all, makes the world go round, or, as Karl Marx put it, “transforms all my incapacities into their contrary” be zero? And how can it possibly ever become negative, as it now is in much of the global economy, with the world’s moneyed people “bribing” governments to borrow from them more than $5.5 trillion?

The answer can only be of a type that economists loathe: philosophical, political, and thus irreducible to neat positivist explanation. In other words, the answer must concern the essence of money.

In a farmers’ market, sellers with many unsold potatoes start dropping the price until a level is reached (possibly very low, but still positive) at which all of the potatoes are bought. In contrast, since the 2008 global financial crisis, every time the price of money has been reduced, demand for it falls and excess savings rise. Clearly, money is not like potatoes or any other well-defined “thing.”

To understand how money can be our societies’ supreme good while fetching a negative price, it helps to start with the realization that, unlike potatoes, money has no intrinsic private value. Its utility comes from what its holder can make others do. Money, to recall Lenin’s definition of politics, is about “who does what to whom.”

Imagine you are an entrepreneur with money in the bank, or have a bank eager to lend large sums to invest in your business. You spend sleepless nights wondering whether you should invest in a new product that is, whether you should exploit your access to money to cause an array of others to work on your behalf. In our current Great Deflation, what worries you most is your customers’ future purchasing power and sentiment. Will they be able and willing to buy your new product at high enough prices and quantities?

Suppose that, sleep-deprived, you then switch on the radio or TV only to hear that US Federal Reserve Chair Janet Yellen and European Central Bank President Mario Draghi are considering reducing interest rates further. Will you rejoice at the prospect that your financing costs will fall? Will you be motivated to invest your own money now that it earns lower (perhaps even negative) interest?

No and no. Your reaction is most likely to be one of alarm: “Oh, my God! If Janet and Mario are considering another interest-rate cut, they must have good reason to believe that demand will remain low!” So you abandon your investment plan. “Better to borrow money at almost no cost,” you think, “and buy back a few more of my company’s shares, boost their price, earn more on the stock exchange, and bank the profits for the rainy days that are coming.”

And so it is that the price of money falls, even as the supply of it burgeons. Central bankers who never predicted the Great Deflation are now busily trying to find a way out with economic and econometric models that could never explain it, let alone point to solutions. Unwilling to question the political dogma that central banks must be apolitical, they refuse to think of money as more than a “thing.” And so they continue the search for a technocratic fix to a problem crying out for a philosophically astute political solution.

It’s a futile quest. Once the price of money (interest rates) hit zero, central banks tried buying mountains of public and private debt from commercial banks to give them an incentive to lend freely. The ECB went so far as to pay banks to lend to business while, at the same time, punishing them for not lending (via negative interest rates for excess reserves).

But bankers and businesses, viewing these measures as desperate responses to self-fulfilling deflationary expectations, went on an investment strike, while using the central-bank money to inflate the prices of their own assets (stocks, art, real estate, and so forth). This did nothing to defeat the Great Deflation; it only made the rich richer, an outcome that somehow reinforced central bankers’ belief in central bank independence.

Not all central bankers, thankfully, are incapable of responding creatively to the Great Deflation. Andy Haldane, Chief Economist at the Bank of England, has courageously suggested that all money should become digital, which would permit real-time negative interest rates to be imposed on all of us, thus forcing everyone to spend at once. John Williams, President and CEO of the Federal Reserve Bank of San Francisco, recently argued that the Great Deflation could be beaten only by targeting the price level and nominal national income simultaneously a New Deal-like approach featuring joint action by the Fed and the government.

What separates these central bankers from the herd is their readiness to jettison the myth of independent monetary policy, to accept that money is the most political of commodities, to challenge the sanctity of cash, and to concede that defeating the Great Deflation requires a progressive policy agenda.

• Yanis Varoufakis, a former finance minister of Greece, is Professor of Economics at the University of Athens. 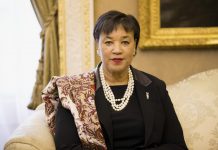