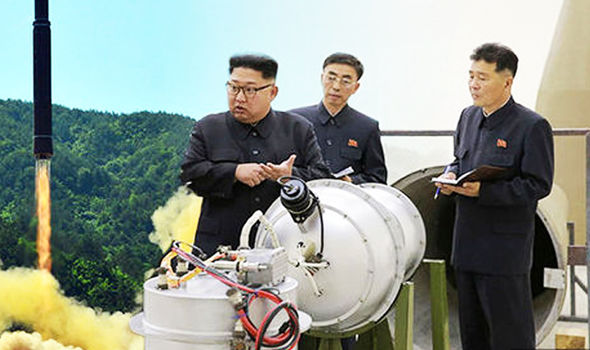 Share this on WhatsApp
Spread the love
By Boluwatife Ezekiel Olaleye
North Korea conducted its sixth and most powerful nuclear test, once again flexing its war muscles on Sunday
Defying UN Security Council resolutions and sanctions, the country’s state television announced that the “hydrogen bomb test ordered by leader Kim Jong-un had been a perfect success,” reports National Daily
Indeed, Jong-un launched an advanced hydrogen bomb for a long-range missile, marking a dramatic escalation of the regime’s stand-off with the United States and its allies.
Although atomic bombs have been dropped in the name of war, never has an H-bomb, 100 times more powerful than the atomic bomb, been deployed.
An impending war? Perhaps. Just this morning South Korea hit back, the country’s warships conducting live-fire drills at sea, with more exercises planned this week.
So what is a hydrogen bomb and what kind of damage can we expect?
The thermonuclear weapon – known more colloquially as a hydrogen bomb, or H-bomb because it employs the fusion of isotopes of hydrogen – was first suggested by Edward Teller in 1942.
ALSO SEE: North Korea dares US again
After years of testing, the first successful American test was conducted in the Pacific in 1952, and the first Soviet test in the following year, reports History Today:
The first hydrogen bomb dropped from the air exploded with a force estimated as equal to a minimum of fifteen million tons of TNT and created a fireball at least four miles wide and brighter than 500 suns.
It was described as ‘by far the most stupendous release of explosive energy on earth so far.’ Dropped from an American B52 jet bomber named the Barbara Grace, flying at around 45,000ft above Namu Island in the Bikini Atoll in the Pacific, it was set off at 5.51 a.m. local time at an altitude of 10,000ft – to minimize [sic] the radioactive fallout – in view of some 13,500 people.
If North Korea had to drop their own version of the H-bomb – designed to be mounted on their newly developed intercontinental ballistic missile (ICBM) – the consequences, as The Telegraph describes, would be monumental:
An estimated 2 million residents of Seoul would be killed if a nuclear weapon of the same size as the device tested by North Korea on Sunday detonated above the South Korean capital.
Every building within 500 feet of the epicentre would disintegrate and anyone within 1 mile would immediately suffer third-degree burns. An estimated 620,000 would die, either immediately or over the following weeks and months as a result of exposure to radiation.
From the magnitude of the seismic tremor more than 4,000 feet below the surface caused by North Korea’s most recent test, South Korean analysts put the scale of the blast at around 50 kilotons.
An explosion of that weapon over Seoul would cause 2 million fatalities, the Chosun Ilbo reported, while the electromagnetic pulse would immobilise all electronic devices.
Share this on WhatsApp
Related Topics:hydrogen bomblong-range missileNorth Koreanuclear testUnited States of America (USA)
Up Next

Humiliate my wife: Death is awaiting you – Pastor Adeboye