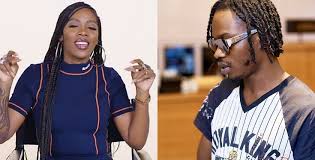 Share this on WhatsApp
Spread the love
Tiwa Savage has released stunning and thought provoking visuals for “Ole” which follows her critically-acclaimed third studio album Celia. “Ole” features Nigeria’s self-proclaimed “bad boy” Naira Marley.
Tiwa Savage has dedicated “Ole” to the courageous #EndSARS protestors. This follows a number of Nigerian artists who have also publicly stated their solidarity with Nigeria’s call for an end to police brutality. Tiwa Savage’s fans, known as Savage Soldiers, have been anticipating the music video.
The Nigerian songstress announced the news on Twitter a couple of hours ago and the views have already been gaining considerable traction. The enthralling visually story of “Ole” is a must-watch.
The music video begins with a write-up dedicated to the continued #EndSARS protests and ends with #WeAreTired. “Ole” captures the fighting spirit of Nigerians who have continued to call out President Muhammadu Buhari’s government.
“Ole” also offers a stark contrast for Tiwa Savage who is known for her use of ebullient colours in her music videos. The visuals tell the story of a bounty hunter who is set on capturing corrupt government officials and making them pay their dues. The video centres Tiwa Savage who is dressed in leather and evidently sporting the “bad girl” aesthetic. The music video is only three-minutes long but shows the extent of the rot within Nigeria’s government while using a humorous audio recording from a parliamentary session.
The songstress produced Celia, titled after her mother, with a nostalgic yearning for Nigeria. Hence, the dedication of “Ole” to the protesters is quite fitting. The songs on Celia are inspired by sounds of Tiwa Savage’s childhood. “Ole” stands out and seems to have been inspired by Afrobeat founder, Fela Kuti, who made sure his music was always a political weapon. Earlier in the year, Tiwa Savage explained that her visuals are usually intentional in order to capture the message of the song particularly when it has political undertones as with “49-99” and “Koroba”.
Celia was released on August 28th this year and features Sam Smith, Davido, Stefflon Don, Dice Alies and Hamzaa. “Ole” is directed by the internationally-acclaimed Nigerian director, Clarence Peters.
Share this on WhatsApp
Related Topics:Naira MarleyTiwa Savage
Up Next