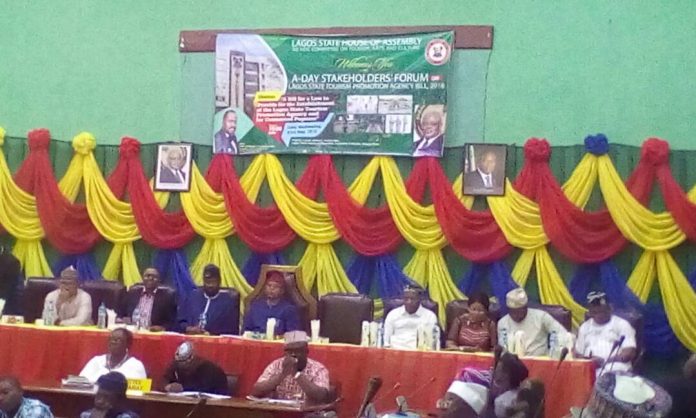 Share this on WhatsApp
By Lanre Adesanya
The speaker of the Lagos Rt. Hon Mudashiru Obasa, has counseled stakeholders in the Lagos Stste tourism industry to up their game and maximize the inherent economic gains available,citing the employment opportunities this could afford the state.
Obasa said this at the stakeholders parley for ” A bill for a law to provide for the establishment of the Lagos State Tourism Promotion Agency and for connected purposes” organised by the Ad-hoc Committee on Tourism, Arts and Culture, at the Assembly Complex, Alausa Ikeja.
The speaker who was represented by the Deputy Speaker, Hon. Wasiu Ehinlokun, stated that for the bill to have impact the trend in other climes remain an eye opener, “tourism in other developed countries has been transformed into revenue generating tool.
“There are still much opportunities to tap from tourism by the state government to boost Lagos economy. The economic potentials in tourism will add more economic value to the state and also help in achieving the blue print of the state’s tourism policies”,
In his comment, the Commissioner of Tourism, Arts and Culture, Mr Steve Ayorinde, explained that there is need for the agency to be in existence so as to consolidate the all round developmental feats of Governor Akinwunmi Ambode after three years.
Ayorinde added that through the existence of the agency, tourism business in the state would be given a facelift and that it would as well open door for more opportunities for youths.
” It is important to have the agency to consolidate the gains that have been made in the state in the last three years. This is the first time that a ministry would be dedicated to tourism arts and culture. The Governor believes that the ministry could take on board people that are coming out of school”
There is no way a state of 21 million people could look away from toursim potentials. If you look at what Morocco, Kenya, Gambia and other countries have done with tourism you will see that it is a good business. There is no country that has done a lot in tourism without a promotion agency. Lagos State is now part of global tourism discussion”
Ayorinde stated that there was a calendar of art events to create an effective platform for tourism events, stressing that the state had already concluded effort on a master plan for tourism development in the state.
He added “We have had a calendar of arts events to have an effective platform for tourism events. We are coming up with the Lagos State Tourism master plan. It is all about having a road map and documents that would guide tourism in the next 15 to 20 years in the state.
“So we need an agency that would not be bogged down by bureaucracy. So it is so critical to the success of the vision we have for tourism in the state. We would need am agency that would not be distracted by the activities of the government to further place Lagos in the global map to change the fact of tourism potentials of the state”
While commenting, Mr. Bankole Bernard, President National Association of Nigerian Travel Agency (NANTA) argued that there is no need to duplicate the responsibility of the tourism ministry, saying that rather than setting up an agency for the promotion of tourism, a corporate organisation that would be registered with the corporate Affairs Commission (CAC) is better of.
Bernard stated that, “We do not want a duplication of the Ministry of Tourism. Rather than setting up an agency, it could be a corporate organisation that would be registered with the Corporate Affairs Commission (CAC). It should be a private entity that can compete anywhere in the world”
He however suggested that,”They should be able to have satellite offices all over the world and be able to keep data. Lagos State should have the opportunity of appointing the Managing Director, while the Board of Directors should contain technocrats from different organisations. The company would be a destination management company and extend the services to other organizations”
Mrs. Otulana from the Lagos State Council for Arts and Culture under the Ministry of Tourism, suggested that renewal should be done annually but span from the date of payment.
In his contribution, Alhaji Aminu Gwadabe, Acting President of the Association of Bureau De Change Operators of Nigeria ABCON noted the impact of his association in the Lagos economy,while appealing that the penalty for defaulters be reduced to reflect realistic stance.
“We have about 4,000 members in Nigeria, fifty percent of which transact business in Lagos. It is a huge sector in the state with a monthly turnover of about N120 Billion. We are critical stakeholders in the sector. The fine of N500,000 is too much. Forex village should be created for the practitioners”
Earlier, in his speech, the Chairman Ad-hoc Committee on Tourism, Arts and Culture, Hon. Desmond Elliot, stated that the intention of the proposed law is to market and promote Lagos domestically and internationally, saying that tourism across the world has become more sophisticated .
Elliot added ” the need to address the tourism industry requires an institution that is not dogged with bureaucracy or tedious process associated with ministerial institutions which may hinder it’s promotion and development”
The bill if passed into law would explore and market tourism resources and products and as well develop and promote Lagos state as a premier travel and tourism destination.
It will also  facilitate the creation of investment opportunities for tourism development by focusing on beach and leisure , culture and heritage, arts and entertainment tourism and other special events.
Share this on WhatsApp