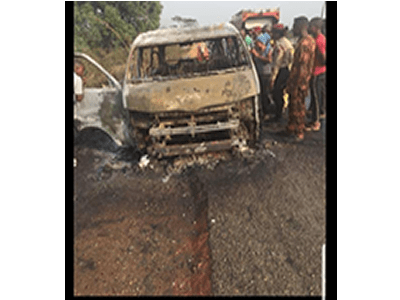 Tragedy struck on Thursday along Benin-Ore road when a Toyota Hiace bus travelling from the east to Lagos was engulfed in inferno killing nine passengers on board. However, 10 passengers were rescued from the burnt Bus while three were said to have sustained injuries

The Sector Commander of the Ogun State Federal Roads Safety Corps, Clement Oladele, had in a statement confirmed that the burnt bus was conveying passengers from eastern part of the country to Lagos. The FRSC Sector Commander disclosed that preliminary findings revealed that the bus was encountering mechanical faults on the way which the driver was trying to manage while carrying inflammable chemical substances.

The FRSC rescue team had rushed to the scene of the accident for urgent intervention and rescue operations which resulted in the saving of 10 passengers.

The Sector Commander, Oladele, had acknowledged that “While some of the passengers were rescued from the raging inferno, some other passengers as at the time of this report are still trapped in the burning vehicle.”

He affirmed that, “A total of 10 people comprising of six male adults and four female adults have been rescued from the inferno with three persons sustaining serious injuries.”

The Ogun Sector Commander also said that preliminary investigations by FRSC Crash Investigators indicated that the vehicle while on transit was malfunctioning at intervals, compelling the driver to stop intermittently to repair a faulty fuel pump and fuel tank.

The Commander added that investigation revealed that the driver continued to manage the situation until suddenly there was a spark and the bus went up in flames.

He noted that it was after the fire was extinguished by the Nigeria Fire Service, that some rescue operatives discovered nine people had died.

The Sector Commander of the Ogun State FRSC Command, Clement Oladele, cautioned motorists to adhere strictly to the 1947 United Nations Agreement Concerning the International Carriage of Dangerous Goods by Road (ADR), in order to prevent such fatal accident. Commiserating with families of the victims, he appealed to the relatives to contact the FRSC Unit Command at Ijebu Ode for details.