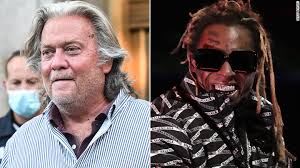 President Donald Trump of the United States sustained his state functions unto his last day in office. The former US President had on Wednesday pardoned 73 people, including his former aide, Steve Bannon, and other political allies, few hours to his exit from office.

The list of those pardoned, including the 70 others whose sentences were commuted, was released by the White House in a statement in the early hours of Wednesday.

Bannon had been charged with, and pleaded not guilty to, defrauding people over funds raised to build the Mexico border wall, a flagship Trump policy.

He was Trump’s campaign manager during the 2016 election, before becoming a senior adviser to the president. He left the White House acrimoniously in 2017, Trump later giving him the derogatory moniker “Sloppy Steve.”

The Wednesday pardon statement read: “Mr. Bannon has been an important leader in the conservative movement and is known for his political acumen.”

And the rapper Lil Wayne, who faced 10 years in jail after pleading guilty to possession of a firearm and ammunition by a convicted felon last month, also made the list.

The star, listed as Dwayne Michael Carter Jr., had shown “generosity through commitment to a variety of charities, including donations to research hospitals and a host of foodbanks,” the statement indicated.