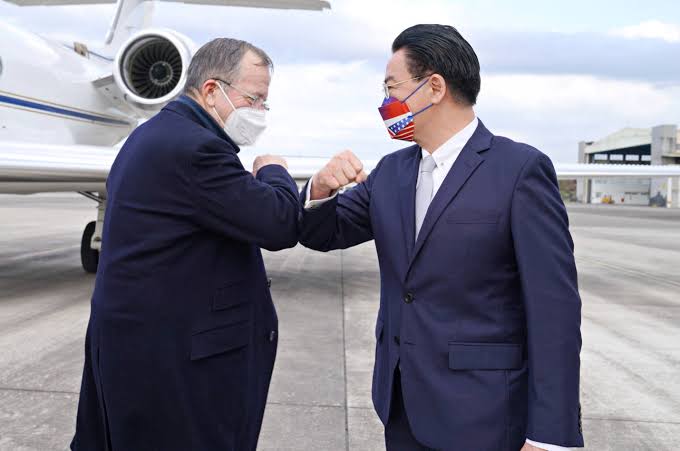 A delegation of former senior U.S. defence and security officials arrived Taipei on Tuesday on a visit denounced by China and happening in the midst of Russia’s invasion of Ukraine.

The visit, sent by President Joe Biden was led by one-time chairman of the Joint Chiefs of Staff Mike Mullen.

It came at a time when Taiwan has stepped up its alert level, wary of China taking advantage of a distracted West to move against it.

Beijing claims the democratically governed island as its own and has vowed to bring it under Chinese control, by force if necessary.

Mullen, a retired Navy admiral who served as the top U.S. military officer under former presidents George W. Bush and Barack Obama, was being accompanied by Meghan O’Sullivan.

O’Sullivan was a former deputy national security advisor under Bush, and Michele Flournoy, a former undersecretary of defence under Obama.

Two former National Security Council senior directors for Asia, Mike Green and Evan Medeiros, are also on the trip, which is intended to “demonstrate our continued robust support for Taiwan,” a U.S. official told Reuters.

The group touched down in a private jet at Taipei’s downtown Songshan airport and was met by Taiwan Foreign Minister Joseph Wu.

China describes Taiwan as the most sensitive and important issue in its ties with the United States, and any high-level interactions upset Beijing.

“The will of the Chinese people to defend our country’s sovereignty and territorial integrity is immovable.

“Whoever United States sends to show support for Taiwan is bound to fail,” Chinese Foreign Ministry spokesperson Wang Wenbin said of the visit.

Taiwan Premier Su Tseng-chang told reporters earlier on Tuesday that the trip showed “the importance both of the Taiwan-U.S. relationship and Taiwan’s position” as well as the staunch U.S. support for the island.

Share this on WhatsApp
Related Topics:arriveChinadenouncesTaiwantripU.S. delegation
Up Next

Foreign students in Russia face no disruption in scholarships – Ministry