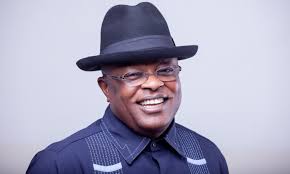 …..Sympathises with victims of fire disaster

He made his feelings known on Friday while inspecting the level of work on the road.

Umahi, who made the unscheduled inspection while on his way from the Akanu Ibiam International Airport in Enugu, expressed dismay that nothing had been done on the road months after it was awarded.

He said that with what he saw, he doubted if the contractor would be capable of doing the job.

The governor said, “I think we have been on this road for about three months. I must say that I am totally and comprehensively disappointed with the contractor.

“I doubt the capability of the contractor to do this job. This matter will be taken back to state Executive Council and within one or two weeks, the council will take a decision.”

Umahi, who was worried that the contractor had almost exhausted the dry season doing nothing, stated that his government would not allow any contractor to play with the road because of its importance to the people of Ebonyi.

“I was thinking that this company will do a good work like they are doing with the flyover projects but that is not the situation. And let it be registered that I said I am totally and comprehensively disappointed on the contractor.”

While he assured that work would start on the road on contract basis latest by the end of the first week of February 2016, the governor directed the Commissioner for Works, Fidelis Nweze, to as soon as possible, commence intervention work on the road .

Umahi also paid unscheduled visit to Ebonyi State School of Health Technology, Ezzamgbo where he expressed dissatisfaction over the poor state of the environment and directed the Principal to meet with the Commissioner for Health, Daniel Umezurike, on the challenges facing the institution.

On his arrival in Abakaliki, Governor Umahi inspected the level of damage caused by the fire that gutted a section of the Abakpa Main Market on Wednesday night.

He lauded the Deputy Governor, Kelechi Igwe , commissioners and the Commissioner of Police, Peace Abdallah, for working hard to ensure there was no greater destruction.
Regretting the level of destruction, he sympathised with the victims but expressed reservation on the poor state of the environment.

He said, “The place is too dirty and houses are so congested. This is why we are making sure there is gradual movement of traders to the International market”.
Umahi said his administration has taken note of the destructions with a view to assisting those whose goods were destroyed.

While urging the public to be extremely careful with fire and ensure they always switch off electrical appliances when not in use , the governor noted that government might introduce “a little levy” on house owners that would be channeled towards prevention of fire outbreaks in the state.

Share this on WhatsApp
Related Topics:David UmahiEbonyi State Govt.Road Dualisation
Up Next