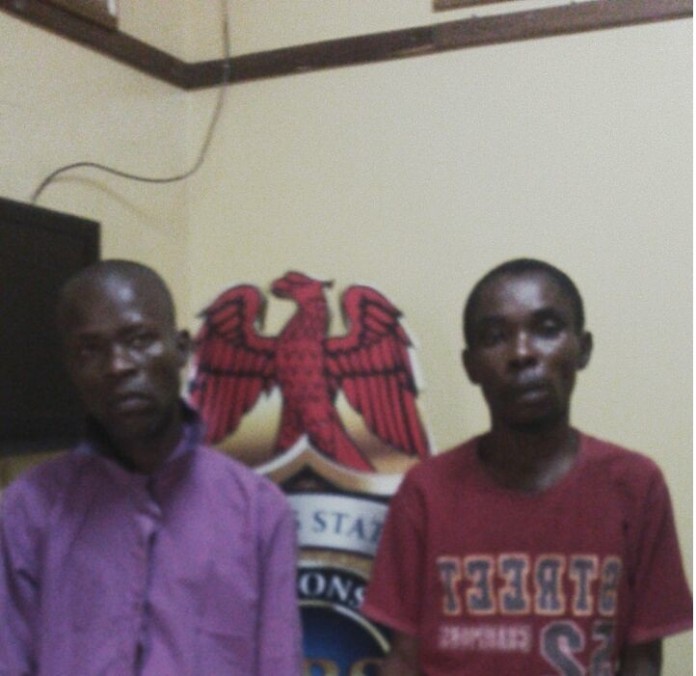 As the Lagos state Police Command intensifies its efforts at combating the menace of robbery in the metropolis, the operatives of the Rapid Response Squad (RRS) have  arrested a-two-man robbery gang who specialised in defrauding unsuspecting members of public.

The suspects, Emmanuel Anyanwu, 39, an ex – convict and Kennedy Ujagbor, 42, a drug addict, were arrested around Cele Bus Stop, along Oshodi-Apapa Expressway of Lagos.

It was learnt that the duo were picked up by the RRS officers at Cele Bus stop, when a victim from whom they snatched his bag the previous day identified them at a drinking joint.

The victim, Sammy Bolaji, was said to be on his way to Ogun State when he was stopped by the duo of Anyanwu and Ujagbor for his assistance. “They asked me if I knew a particular address and I told them that I was a stranger in that area”, he stated.

He explained, “As I made to leave them, one of them grabbed my bag from behind and took to his heels. The second one followed suit. I ran after them but I guess they knew the route more than I do, so they escaped before people around could even come to term with what was going on.

He further narrated that he had N7, 500:00, two mobile phones, clothes and other personal effects. I had to discontinue my journey because all I had on me were stolen”.

“The following day, my mum chose to drive me through the same spot where my bag was snatched. Luckily, I saw these same guys sipping alcohol early in the morning very close to the spot where I was robbed. I alighted not telling my mother what I had seen, at least, to confirm first.

“As things would work my way, I saw RRS’s patrol vehicle passing by and I waved them down, narrated all that happened the previous day and they followed me to where these guy were sitting.

They were shocked to see me with the police. They interrogated them and arrested them after confirming the incident.

“They promised the officers that they would retrieve my bag for me in Ketu, where they sold it to”, he stated.

Emmanuel Anyanwu, in his confession said, “We are swindlers. We are always on the street looking for people to defraud. Yesterday, we met this guy. Our plan was to play him and it didn’t seem to work out, so we snatched his bag and ran away. His bag is in Ketu,” he further explained.

Explaining their modus operandi, the suspect revealed that they usually tell their victims that they are foreigners with a huge consignment of mobile phones and stationery.

“We would now pretend that we were in search of marketers with enough money to buy the goods.

“In the process, we persuade our victims to show interest in buying the goods by dangling before them an irresistible offer. If they show interest, we tell them to demonstrate their seriousness with a commitment by depositing their phones, money or jewellery. That is how we con them”.

Confirming the development, the Police Public Relations Officer (PPRO) Superintendent of Police, superintendent  Dolapo Badmus stated that the police would leave no stone unturned towards reducing crime in the state.

The suspects have been transferred to the State Criminal Investigation Department (SCID) for further investigation.