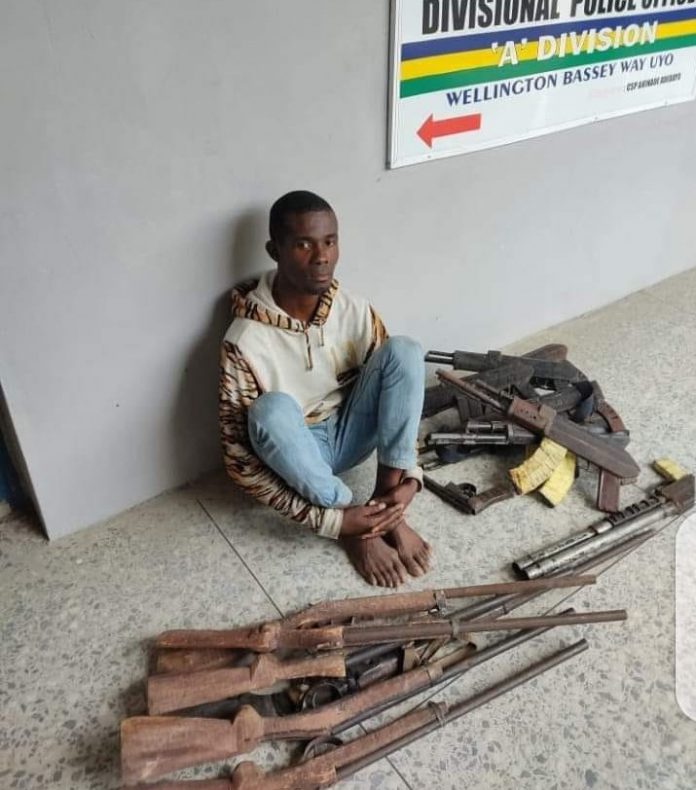 Ekike Hector David is a fabricator at Nsit Ibom, Akwa Ibom—as far as regular Joes in the area knew.

But when the police busted him September 13, following security intelligence, David presented to the world as a gunrunner—and gun maker, even if crude.

Akwa Ibom State Police Command said it arrested him, and recovered a cache of locally fabricated AK-47 rifles, pump-action guns, pistols, and others

The command’s Public Relations Officer, SP Odiko Macdon, who disclosed this in a press statement in Uyo, the State capital.

Macdon said upon the suspect’s arrest, the items recovered from him included: eight locally fabricated AK47 rifles, one a pump-action gun, a pistol and six dane guns.

According to him, David had been selling the weapons to criminals who use them to rob and terrorize innocent people in the State.

He added that the Commissioner of Police, CP Amiengheme Andy had ordered discreet investigation into the crime and manhunt for the persons who patronize the suspect.

President Muhammadu Buhari has sent a bill to the NASS for a law to control small arms and light weapons (SALW) in Nigeria.

It has been estimated that close to 500,000  illegal weapons are out there across the nation, fuelling banditry and terrorism.