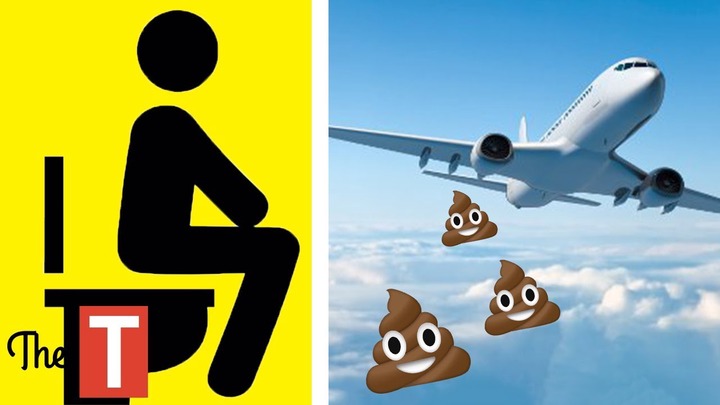 Everybody knows that a plane is airtight! Every crevice is sealed to keep the cabin pressurized. Because otherwise, none of us would be able to breathe this high up in such thin air. But what about all those movies showing holes in the fuselage ripping passengers right out of the plane in the blink of an eye?! So when you flush the toilet, you open that hole, creating an opportunity for the pressure difference to eject the contents…right?

Well, even if you were somehow pulled through that tiny hole, you wouldn’t get spit out of the plane. When you flush the toilet on an airliner, the contents don’t just get sprayed across the Earth for everyone down below to have to deal with. That would be gross, harmful for people and the planet…and illegal!

– Even if you were somehow pulled through that tiny hole, you wouldn’t get spit out of the plane, spaghettified or not.

– That’s not to say airplanes don’t decorate the landscape with sewage these days…only now it’s purely by accident.

– But if you got pulled through the toilet, you wouldn’t end up hurdling toward the ground – you’d just go to that onboard holding tank that keeps all the waste until it can be emptied.

– The onboard lavatory system does make smart use of the pressure difference between the inside and outside of the plane. And that’s why it’s so loud when you flush.

– When you flush the toilet, it opens a sort of flap. Because high pressure will always go where its lower when given the chance, the immense air pressure in the cabin pushes whatever’s in the toilet down to the holding tank.

– Even at breakneck speeds, the suction isn’t enough to pull you through. It’s not even enough to push the compressed air out of the lavatory itself since there are vents to the room, and the doors aren’t airtight.

– It also isn’t enough to suction you to the toilet seat if you happened to be sitting on it when you flush. Technically, it could if you somehow managed to create a perfect seal.

– Well if you can’t get pulled through or suction-cupped to the seat, then why are there these warning signs telling you to close the lid before you flush?

– For one, it’s deafeningly loud and disturbs other passengers. But more importantly, it’s something you should do even at home because of what’s called “toilet plume.”

– If there’s one place that’ll spit you out the back of the airplane, it’d be the tap system!

“Sadly, 92% of the vaccinated population had died” doctor admits