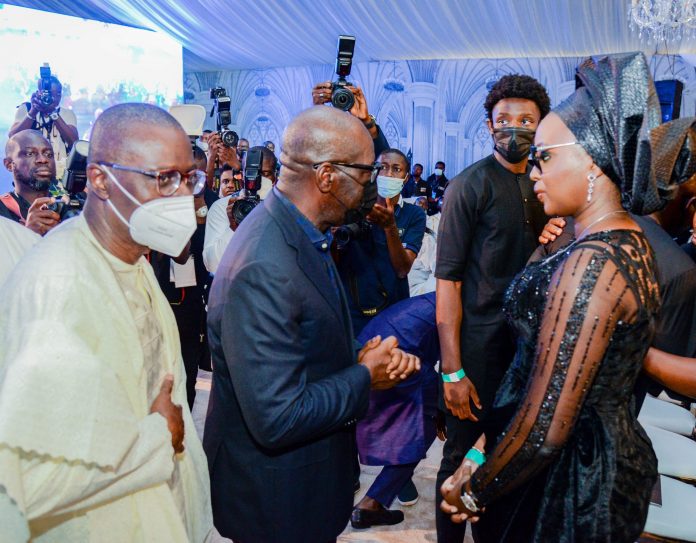 Despite his political opposition to the late billionaire Captain Hosa Okunbo, Edo Gov Godwin Obaseki still came to the funeral of the late philanthropist on Friday.

Obaseki described the late Okunbo as a man who was determined to surmount world challenges.

He said the deceased pushed himself to the limit to achieve greatness, building an impressive business empire and transforming the lives of numerous people.”

“Captain Hosa was a philanthropist who gave lavishly of himself and his resources. He will be remembered for his dying love for Edo people and Nigeria.”

He said in building a business empire, the late Okunbo displayed rare business acumen, providing employment for thousands of Nigerians and contributing greatly to the development of the nation.

No fewer than four governors were among the dignitaries who attended the funeral service.

Among other governors at the funeral service which held in Benin, capital of Edo, Babajide Sanwo-Olu (Lagos), Dapo Abiodun (Ogun) and Atiku Bagudu (Kebbi).

Two daughters of President Muhammadu Buhari, Halima and Zara, were also in attendance.

In his homily, ‘Life is a mystery’, Apostle Ekwueme Goodheart Obi, said there was a time for everything and that Okunbo had spent the better part of the last one year in “deeper relationship with God.”

“We all that are alive are indebted to God as no one owns his or her life. Life is a gift as we would render stewardship one day on how we used the life given unto us all,” he said.

Also speaking, first daughter of late Capt. Okunbo and wife of the Olu of Warri, Olori Atuwatse III, described her late father as a man with many parts and purposes.

“My father was a great man. He lived in service to humanity. My father worked on purpose and in doing so, encouraged others to find their parts and purpose in life.”

Okunbo , 62,died at a London hospital after battling a cancer-related ailment.