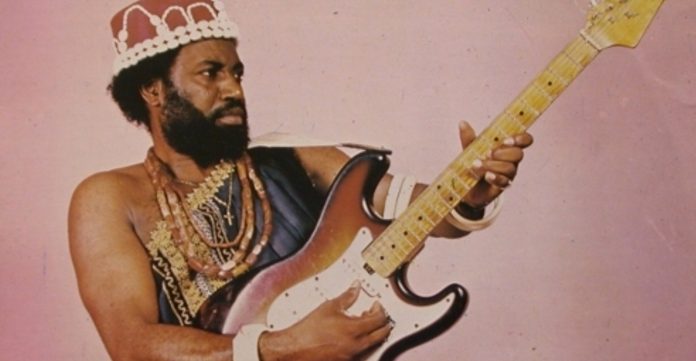 Chief Dr. Oliver Sunday Akanite (April 14, 1947 – June 21, 2008) was a Nigerian highlife musician and guitarist who recorded more than 73 albums to his credit, making him the most popular highlife king of Africa. His music band group are known as Ogene Sound Super of Africa, which blended modern high life and traditional Igbo music.

The music star had 12 kids: seven boys and five girls. And they all enjoyed their father’s presence. “It was awesome. My siblings and I didn’t see him as a famous figure. He was a normal, caring, jovial and loving dad to us,” Darlington Akanite, one of his sons, disclosed to press men.

While growing up, Oliver was popularly called the Game Master. This was because he was good at the game of draft. Draft in Igbo language is ‘Okwe.’ People began to call him Oliver De Ka Okwe.

He then changed the name to sound more like a French name; that was how he came up with Oliver De Coque.

He loved to buy clothes. He spent a lot of money maintaining his looks. In fact, he spent N30,000 on his beard weekly and that amounted to N120,000 monthly.

He went to his salon twice a week. He always said his beard was his signature look. He said if someone decided to keep a beard, it was right to maintain it.

He fell ill at the end of 2007. He was diabetic and hypertensive. Most artistes don’t like to disclose their health challenge.

His son is of the opinion that if he had disclosed his health challenge, he would have gotten help quick. He was ill for three months. “He then recovered in February 2008 and began to go for shows. He died on June 20 but he had planned to travel to the US on July 2 for checkup,” Darlington added.

He told the press that it was as if his father knew he was going to die because on the day he died, he decided to stay indoors. “And he wanted me to stay by his side.”

“That morning, after he had his breakfast, he began to feel ill. He said he was going to cancel his appointment for that day. I didn’t know it was a serious matter; all I did was to console him. I went to the bathroom to take a shower and then told him that I wanted to visit a few friends. He begged me not to leave his side; I became upset. I thought he was depriving me of catching fun. I grudgingly stayed back.”

While Darlington stayed with him, he began to tell him of how he started his career. As he said the story, he complained of not breathing well. Oliver then decided to go to hospital. On their way to the hospital, he called the driver to increase the temperature of the air conditioner; he said he was feeling hot. His son became scared when he began to shout ‘wheelbarrow! wheelbarrow! ‘Darlington, please bring a wheelbarrow.’”

Darlington wondered what was happening. It was after he died he realised the highlife maestro was referring to a wheel chair.

I think he was becoming paralysed and unconscious. When we got to the hospital, he was rushed to the emergency ward.

“Throughout his time at the hospital, he kept begging me to save him but there was nothing I could have done,” the son said.

Before he died, he held Darlington’s hand close to his side as he took his last breathe. His son closed his eyes and kissed him on the forehead. “I was so confused about all that happened.”

If Oliver had made his health condition public, the son believes more than 200 Igbo people would have laid their lives down for him.

He is gone, leaving behind a vacuum. But he’s taught the entire family a lesson: whenever one is facing a challenge, one shouldn’t keep quiet about it.
“I want people to learn from his death.”
Share this on WhatsApp