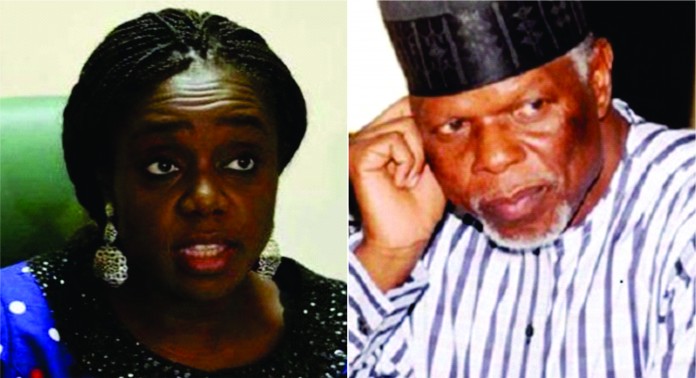 THE Controller-General of Customs, Hameed Ali is said to be on a collision path with the Minister of Finance, Mrs. Kemi Adeosun over some decisions taken by the CGS without recourse to the Customs supervising ministry, National Daily has gathered.

The hostility between the two came into the open at the budget defence session before the Senate Committee on Finance where the CGS told the Finance Minister that he would only take order from the President.

A top senior official at the finance ministry said that things were not at ease between the Minister and the CGC with respect to the controversial retirements and promotions of senior officers.

A source at the Ministry said that from the retirement of the Deputy Comptrollers General to unilateral decision by the CGC, the Minister was already sidelined in the running of affairs in the service.

He said, “For instance, the retirement of DCG and ACGs’ by the CGC are the prerogative of the Customs Board, the Customs CG cannot unilaterally retire or promote any officer to the rank of ACG (Assistant Comptroller General), it is the board that must ratify such actions.”

The Customs board is charged with the prerogative to promote, transfer and confirm appointments and dismiss persons and exercise other disciplinary actions over persons so appointed. The CEMA stipulates that the board shall be subject to the control of the Minister of Finance in the exercise of powers and duties.

The Minister of Finance chairs the board of the Nigeria Customs Service, other members of the board include Customs CG, Deputy Comptrollers-General, a representative of the Ministry of Transport, representative of the Ministry of Commerce and Industry, Chairman of the Federal Inland Revenue Service (FIRS), Manufacturers Association of Nigeria (MAN) and Nigerian Association of Chambers of Commerce, Industry, Mines and Agriculture (NACCIMA), among others.

The source added that by civil service designation, the CG of Customs is the equivalent of a Director in the Ministry. He frowned at the way the CGC engaged the Finance Minister in a shouting match at the National Assembly asked the President to mandate Ali to follow protocol.

“At the budget screening, he called the bluff of the Minister, saying that he reports only to the President. So, is the Customs now an agency in the Presidency? Buhari should intervene before it degenerates to a big mess. Authority must be respected. The Customs boss can’t be bigger than the Finance Minister,” the source said.