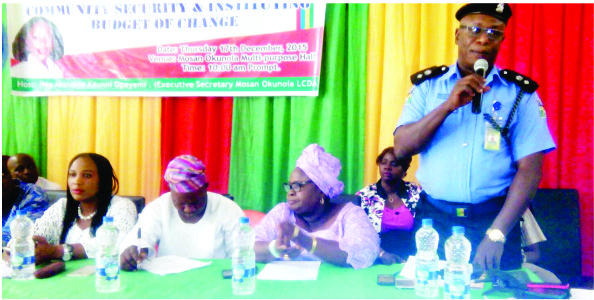 STAKEHOLDERS in Mosan Okunola Local Council Development Authority, (LCDA), a subdivision of Alimosho Local Government Area, (LGA), of Lagos State; held a forum tagged “Community security and instituting budget of change” to aggregate inputs into the twin issues that are germane to the Council in year 2016; security and budget.
The Executive Secretary of the Council Hon Opeyemi Akindele, while declaring the forum open, said the primary role of public officials is the protection of lives and properties, of residents and businesses in their respective areas of jurisdiction.
According to Hon Akindele, growth and development take place only a secured environment. She solicited the cooperation of stakeholders gathered at the event, to make meaningful contributions that will aid the Council executives in formulating the 2016 budget of the Council.
She also harped on the need for stakeholders, to encourage members of their respective catchments to promptly pay their taxes, dues, rates and levies; as these are the sources where revenues are pooled for the development of the Council; Hon Akindele adds that in 2016, the Council is poised to embark only on people oriented programs and projects.
Hon Akindele explained that the funds that accrued to the Council in 2015 were judiciously used in renovating the Kokumo Primary Health Centre, constructing the Secretariat Road, the Council Secretariat fence and gate house, the Abesan Estate Gate House, grading of Roads and drilling of water borehole in strategic markets in the Council area among other projects.
Departmental Head Budget, Planning and Statistics of the Council, Alhaji Kazeem Eleniyan Adesanya, said the Council is keying into the Medium Term Expenditure Framework, (MTEF), in line with the Federal Government, and by doing so the Council will adopt a three year budget policy.
Adesanya informed the gathering, that the Council in 2015 experienced a near average internally generation revenue performance of 45 percent of it projected revenue drive. He further informed stakeholders at the forum that dwindling allocation to all tiers of government, affected the Council’s 2015 budget performance; giving the significant drop in Crude Oil price and volatility in the foreign exchange market; this scenario may not change in 2016.
Adesanya said as the Council executives embarks on budget retreat exercise, it is incumbent upon them to make 2016 budget making process, a bottom-up approach, by interfacing with stakeholders and obtain their inputs.
This he explains will make the 2016 budget people owned, it implementation will be less cumbersome and the performance of the proposed budget can be measured at the end of the year.
The Secretary Community Development Committee, (CDC), Mosan Okunola LCDA chapter, Mr. Olufemi Oyewole Ojo made a formal submission at the forum on behalf of his group.
While outlining the content of their submission Ojo said the Council need to embark on aggressive tax education, taxable individuals and businesses in the Council should be identified, a mechanism be put in place to check wastages and loopholes in the system and the Council should not shy away from enforcing revenue collection.
Ojo said it is apparent that with the dwindling Crude Oil price the era of huge allocation to the Councils is over and what can bail the Council out in particular is the internally generated revenue. Since Lagos State has done it; Mosan Okunola should take a cue and do the same.
While anchoring the security forum the Divisional Police Officer, in charge of Gowon Estate Police Station, CSP Otabor Festus commended the stakeholders present at the meeting for the hand of fellowship extended to the police in the line of their duty.

Share this on WhatsApp
Related Topics:2016 BudgetCDCLCDAMosan Okunola LCDAMTEF
Up Next