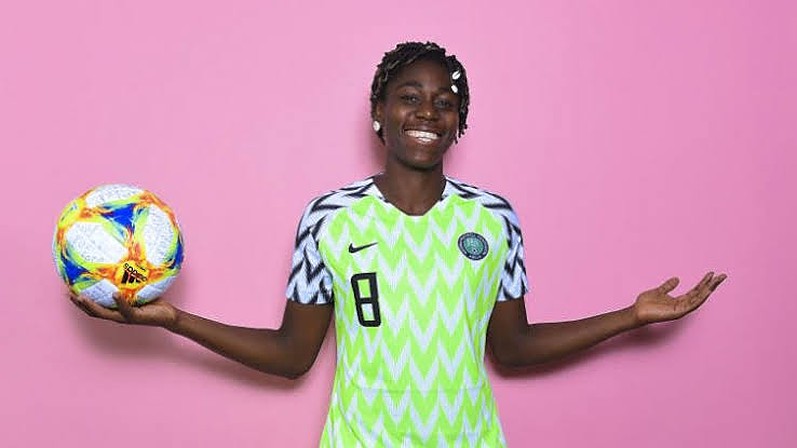 The Association of Nigerian Women in Sports (NAWIS) have commended former Super Falcons captain, Asisat Oshoala, who was on Thursday in Morocco named African Women Player of the 2021/2022 season.

The News Agency of Nigeria reports that Nigeria’s Oshoala became the first player to win for the fifth time the African Player of the Year award at the Confederation of African Football (CAF) Awards.

Oshoala warded off competition from Cameroonian Ajara Nchout Njoya and Zambia’s Grace Chanda to win her fifth women’s title at the CAF Awards ceremony in Rabat.

Bola Adeyanju, NAWIS National President praised Oshoala for her patriotism, dedication to football at both her club, FC Barcelona Feminine, and the nation’s senior women team, the Falcons.

Adeyanju further described the striker as a perfect role model of how the girl-child should be empowered, through sports and education, and in leadership.

Many fans and lovers of the beautiful game have also felicitated Oshoala on her history-making feat, including Super Eagles Lorient FC striker, Terem Moffi and Nantes winger ,Moses Simon.

Oshoala’s impressive outing for Barcelona last season made her the deserved winner of the top individual award for women on the continent.

The 27-year-old played a crucial role as Barcelona went unbeaten throughout the entire season to lift the Spanish La Liga Feminine.

Oshoala was also brilliant as the Catalans won the Copa de la Reina.

Barcelona also reached the final of the UEFA Women’s Champions League but lost to French side Lyon.

NAN also reports that with the recent triumph, the Barcelona striker becomes the first player in history to win five African Player of the Year awards.

Oshoala had previously shared the top podium with Nigerian and Super Falcons great, Perpetual Nkwocha on four wins and Cameroonian Samuel Eto’ in the men’s category who won the awards four times.

9 burnt to death in auto crash