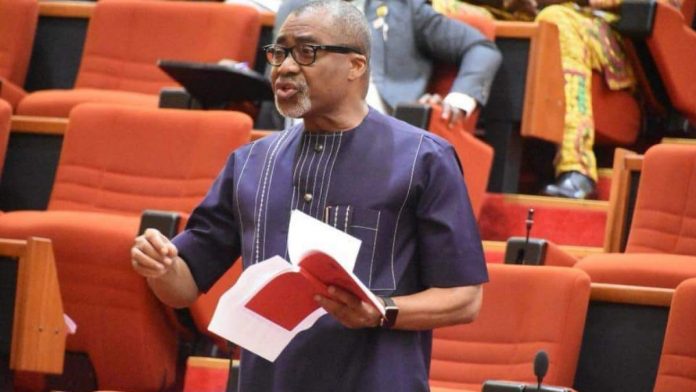 Senate Minority Leader, Senator Enyinnaya Abaribe might be dumping the PDP for the APGA in the quest to run for the Abia governorship election in 2023.

The senator just withdrew from the PDP governorship primaries scheduled today in the State, more or less surrendering to the power play by Gov. Okezie Ikpeazu.

“To make matters worse, the use of only an imaginary 3-man ad-hoc delegates to the exclusion of the party’s statutory delegates in the primary elections to elect our candidates even when INEC, the nation’s electoral umpire, has unequivocally stated that no congress held in Abia State for that purpose, has no doubt put the party and her candidates in a quagmire,” Abaribe said in a press statement Wednesday.

“I Senator Enyinnaya Harcourt Abaribe will not be part of this charade.

“I am, therefore, withdrawing from the exercise, which means that I will not be part of the PDP governorship primary election that holds in Abia State on Wednesday 25th of May, 2022, as doing so would have amounted to endorsement of an illegality that is already being challenged in the courts.

“I, therefore, ask all our people, our teeming supporters and Ndigbo to remain calm, keep the faith and wait for the new direction, which will be announced very soon.

“What is important is that the campaign to liberate Abia State would surely assume a new dimension. The time is now.

“Unfortunately, the ugly developments ignited by a rapacious ambition to maintain the wicked governance status quo of imposition and godfatherism have aborted this quest in PDP.

“The implication for our party is grave and as such has put all ongoing primary exercises on quick sand”.

A report by the Daily Post stated how Augustine Ihemere, the APGA State chairman, accompanied by other party State exco members recently visited Abaribe at Obingwa.

They reportedly asked him to run on the APGA platform, and have even bought him the N10-million naira nomination form.