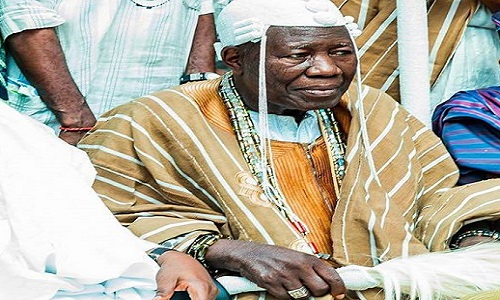 The Olubadan of Ibadan, Oba Saliu Adetunji, has described the purported outcome of of the Judicial Commission of Inquiry for the review of the existing 1957 Declaration of Olubadan of Ibadanland and other related chieftaincies in Ibadanland, headed by Justice Akintunde Boade (retd) set up by the Oyo State government, “as a joke carried too far.”

The traditional ruler stated this on Tuesday, in a statement issued and signed by his Director, Media and Public Affairs, Adeola Oloko and made available to journalists in Ibadan.

Last week, the Commission of Inquiry submitted its report to the state governor, Senator Abiola Ajimobi, at the Governor’s Office, Ibadan.

This highlight of the recommendations was recommendation of a 32-beaded-crown-wearing Obas in Ibadan while the Olubadan, Oba Saliu Adetunji, will maintain his status as the paramount ruler of the  ancient city.

Reacting to the statement allegedly made by the Commissioner for Local Government and Chieftaincy Matters, Mr Bimbo Kolade’s interview on Splash FM programme, ‘Oro Sunnukun’ on Tuesday, the Director, Media and Public Affairs to the Olubadan, Mr Adeola Oloko said the opposition of Oba Adetunji to the chieftaincy review embarked upon by the state government stood.

Oloko said “the erroneous impression in that interview was that Kabiyesi had, at one time, opposed the chieftaincy review before he later changed his mind to support it.

“For the avoidance of doubt, there was never a time the Olubadan supported the review embarked upon by the Oyo State government. This was why the first-class monarch did not submit any memorandum or make any representation to the panel. When last week, the panel submitted its report to the state governor, the public would remember that Olubadan was not in the picture at all,  because he was not invited.

“Both the young and old in Ibadan know that the Ibadan chieftaincy system is not a creation of the government. It is a creation of Ibadan people. No king, no governor, no elite, no high chief has the right  to tamper with the system without recourse to our people. How many town hall meetings has the state government convened before arriving at the conclusion that Ibadan deserves 32 crowns? To show  ignorance of our tradition, the panel lumped our highly-respected high chiefs with baales who are always nominated by the family mogajis.

“Secondly, if the traditional institution wants a review, it is not the duty of government to spearhead the review. It is the duty of the Olubadan sitting in council to sit and look at what they want to review and register same to the state government for approval.

In Ile-Ife, where the commissioner mentioned on the interview, this is the tradition. The Osun State government did not spearhead  the review. In Lagos and Ogun states, the case was similar.

Besides, there are two cases in court in respect of this same issue, which the Oyo State government is not unaware of.

“Thirdly, you do not have to be a member of the Oyo State Council of Obas and Chiefs to know that creation of royalties and crowns is a matter for discussion and deliberation. So, the question is ‘how long ago has the council met’? Therefore, it is an exercise in futility to embark on creation of new crowns and royalties without first of all resolving these issues.

“Besides, how many emirs are in Kano city  if you are talking of size and population? How many Sultans are in Sokoto? And, how many Queens are in England? Kabiyesi will not be able to attend the meeting called by the Ministry of Local Government and Chieftaincy Matters to discuss the issue slated for Wednesday, August 23 because of a subsisting court order as Olubadan is a law-abiding citizen of Nigeria,” Oloko said.

Reacting, the Attorney-General and Commissioner for Justice in Oyo State, Mr Seun Abimbola, has argued that the state has no court order restraining the release of the white paper on the Olubadan declaration review report.

Abimbola, speaking in light of the litigation filed by Senator Rashidi Ladoja, challenging the Akintunde Boade-led Judicial Commission of Inquiry on Olubadan Chieftaincy Declaration, said the case filed did not challenge the release of the white paper.

The constitution of the review panel had been subject of a litigation filed by Ladoja, Osi Olubadan of Ibadanland, who asked the court to restrain the panel from sitting or accepting memoranda from people pending the determination of the suit.

However, the Boade led review panel last Friday submitted its report to Governor Abiola Ajimobi, among which it recommended that Ibadan should have 32 crown-wearing obas with the Olubadan remaining the paramount ruler.

Abimbola, while speaking with Nigerian Tribune, on Tuesday, said: “The case in court has nothing to do with the release or non-release of the white paper on the Olubadan declaration review. There is no semblance of restraining order from the court.

“They have filed papers in court alleging various things, most of which are fabricated based on their version of the turn of events.

“No individual, organisation can pronounce anything contemptuous except a court so pronounces. I can allege, claim based on the facts I am presenting, but when the court that has the capacity and jurisdiction to look at both sides, they will be able to determine and pronounce appropriately.

“But, everybody should sheath their swords, leave it to the court and they might as well withdraw their case in court.”

In the same vein, State Commissioner for Information, Culture and Tourism, Mr Toye Arulogun, on Tuesday, said the white paper would be released before the end of the week.

It will be recalled that lead counsel to Ladoja, Michael Lana, in a motion filed before Justice M. I. Sule, on Monday, had asked the court to nullify the proceedings of the panel and its report.