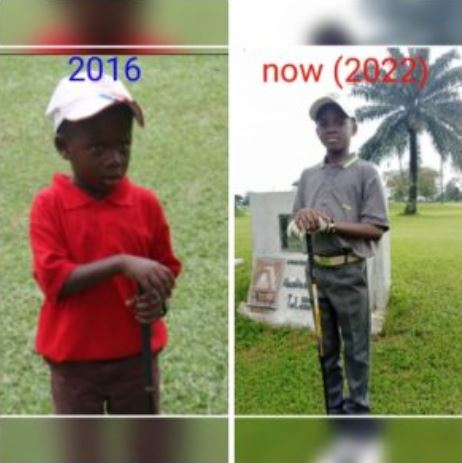 A three-year-old golf prodigy in 2016, Lewis Dandyson, who entered the annual Awa Ibraheem Junior Golf Open Championships as the youngest ever, says he wants to be the champion of the 2022 tournament.

Dandyson, now nine years, in an interview with the newsmen on Monday, said he is matured enough to take the top prize at the age-grade golf championships scheduled from Oct. 21 to Oct. 22.

NAN reports that the Awa Ibraheem Junior Golf Championships is for children from ages five to 18 and is organised to celebrate a golf icon, Alhaji Awa Ibrahim, whose birthday is on Oct. 19.

However, six years ago, Dandyson as a three-year-old boy, caught the attention of many as he thrilled golfers and spectators alike when he made an unexpected entry into the 3rd Awa Ibrahim Junior Golf Open Championships.

The young golfer who was accompanied by his mother, Noble Dandyson, from Port Harcourt, their base, to the Ikeja Golf Club, venue of the championships, left many astonished with his displays.

Dandyson’s mum, Noble, in a chat with NAN, claimed that he was ready to take up the challenge from the older kids.

On the motivation behind presenting the young Dandyson for the tournament, the Noble said that she wanted to set an example for other parents to encourage their children in sports.

Now at nine-year-old, Dandyson told our correspondent that winning the coveted top prize was his target as he entered the 2022 tournament to be held at Ikeja Golf Club.

“I was very young then, but now I am old enough to play with my mates. I am preparing well now.

“I really enjoy playing golf and I am looking forward to the challenge.

“I have been practicing well for about three months, I started with nine holes to 18 holes, and I hope to reach 36 holes.

Seven-year-old Lewis’s younger brother, Jordan Dandyson, who also registered for the 2022 championships, told newsmen that he would love to follow his brother’s footsteps and be a golf champion.

“I have been registered for the golf tournament and I wish to win.

“I want to be like my brother, Lewis. I have been training well for over two months at my golf club,” he said.