AT best, a revitalized Biafran secessionist movement will lead to mass bloodshed. At worst, it will trigger the country’s unraveling.

Crowds of Igbo-speaking people barricade streets across southeastern Nigeria, bringing traffic to a standstill. They wave black, green, and red secessionist flags; distribute their own currency and passports; and demand the creation of a new independent country called Biafra. It could be 1967 or 2016.

Nearly 50 years after the same region of Nigeria seceded, sparking a devastating civil war, separatists are once again threatening the fragile national unity of Africa’s most populous country. Back in 1967, the federal government deployed a quarter million troops to quash the secessionist movement, while also imposing a land and sea blockade. Over a million civilians died in the nearly three years of fighting that followed, mostly from starvation.

Why is the southeast once again considering secession when the region’s last attempt resulted in such horrendous suffering? Part of the answer is that many Igbos, who form the majority in Nigeria’s southeast but a minority in the country as a whole, view the failure of their previous attempt at secession as the great missed opportunity of their time.

For three decades after the war, military dictatorships suppressed all secessionist talk, leaving Igbos to wonder silently about what might have been. But after the country transitioned to democracy in 1999, latent separatist inclinations began to resurface once again.

ALSO SEE: FG should give attention to pro-Biafra agitators

The resurgence of the Biafran secessionist movement is symptomatic of a much deeper problem with the Nigerian state. The federal government’s chokehold on states and ethnic groups is fueling multiple demands for autonomy and the right to manage resources at a local level demands that could ultimately lead to a fracturing of the country. The latent insurgency in the oil-producing Niger Delta is one example of this trend, as is the emergence of the Oodua Peoples Congress (OPC), which has acted both as a violent vigilante group and as an advocate for the autonomy of the Yoruba people of southwestern Nigeria.

A deep disillusionment with the Nigerian government also lies at the heart of the Biafran dream of independence. Igbos have long felt marginalized and excluded from economic and political power by the Hausa-Fulani and Yoruba ethnic groups, which have dominated national politics and the bureaucracy since 1970. Many Igbos believe that the federal government (and their fellow Nigerians) have never forgiven them for seceding in 1967, and have discriminated against them ever since. They believe that in Biafra they will find all the things that Nigeria has failed to provide: good leadership, jobs, infrastructure, regular electricity, economic and physical security.

“Nigeria is a mess…with bad and corrupt leaders,” a Biafra supporter in her mid-20s told me recently. “We want freedom.”

Yet not everyone is willing to risk a war for independence. Younger Igbos born after the civil war tend to be more militant about Biafra in 2016 than their parents and grandparents, whose memories bear scars from the previous attempt at secession. One 72-year-old Igbo man, who was wounded during the 1967-1970 civil war and left bleeding and without food or drink for days, told me, “No one who experienced what happened last time will ever advocate Biafra again.”

But roughly two-thirds of Nigeria’s population is under 30 years old, making them too young to remember the suffering that accompanied the last civil war. These youngsters have plenty of reasons to resent the central government: Nigeria’s youth unemployment rate stands at approximately 50 percent. In the southeast, the feeling of marginalization only deepened after last year’s presidential election. Igbos voted heavily for the former president, the southerner Goodluck Jonathan, who lost to Muhammadu Buhari, a Muslim from the north. As an army officer, Buhari had fought to crush the first Biafran independence movement; the most powerful jobs in his new government went to the Yoruba and to northern ethnic groups.

Now Nigeria’s new president may once again be on a collision course with separatists in the southeast. Like all previous Nigerian heads of state, Buhari regards the country’s unity as non-negotiable. He will not allow the region to secede without a fight not least because it contains oil fields that supply three-quarters of the government’s revenue. Oil is thus an incentive for unity as well as disintegration: It gives Igbos confidence in the economic viability of an independent Biafran state, but also gives the government a powerful reason to prevent such a state from ever coming into being. If Igbos continue to agitate for independence, mass bloodshed seems inevitable.

Secession would lead to confrontation on two levels between Igbos and the federal government, and between Igbos and other minority ethnic groups in the southeast. The latter such as the Efik, Ibibio, Ijaw, Esan, and Urhobo ethnic groups do not want to exchange minority status in Nigeria for minority status in a new country dominated by Igbos. To succeed in winning their own state, therefore, Biafran separatists would need to fight both a war of independence and a second war of repression against the minority groups living in their midst.

The Nigerian government has made clear that it views the Biafra issue as a danger to national unity, and Buhari has said he regards the movement as “treasonable.” Last October, security forces arrested Nnamdi Kanu, the leader of the secessionist Indigenous People of Biafra (IPOB) movement, on charges of sedition and treason, and ignored a subsequent court order to release him. The symbol of the Biafran independence movement, Kanu is regarded as a dangerous man by authorities. He is alleged to have tried to procure weapons in the United States, and once told a public gathering, “[I]f we don’t get Biafra everybody will have to die, as simple as that.” But by arresting and detaining him, the government only added fuel to the Biafra fire, causing the protests to intensify and spread across cities in the southeast over the past three months.

Even if the government calms the Biafra storm, its standard refusal to consider demands for regional autonomy all but guarantees that another insurrection will emerge somewhere else in the country. Making matters worse is the demographic time bomb that ticks faster each day in Nigeria. A dramatic “youth bulge” has turned grievances of the type felt by young Igbos into a national security risk in marginalized communities across the country.

Every few years, young people from one of these communities rise up and shake the country’s unity. Ethno-regional separatist groups such as the OPC in the southwest, Boko Haram in the north, and the Movement for the Emancipation of the Niger Delta in the oil-rich deep south are notable examples.

Yet the government has no viable plan for dealing with uprisings like these beyond sending in the army. Two years ago, the former national security adviser, Sambo Dasuki, revealed that Nigeria’s military was deployed in 28 out of the country’s 36 states a fact that suggests it has become more of an internal occupation force than a defender against external aggression.

Nigerian governments have a long history of treating serious problems as molehills until they become volcanic-mountain-range problems. In 1995, the government executed Ken Saro-Wiwa and eight other activists who had dared to call attention to economic exploitation and marginalization in the Niger Delta. The core complaints raised by the activists were never addressed, however, and soon they had given rise to an armed insurgency that reduced Nigeria’s oil output by 50 percent and cost it billions of dollars in lost revenue. In the early 2000s, the government also ignored a small religious sect in the northeast only to watch it morph into Boko Haram.

As resentment mounts among Igbos in the southeast, the Nigerian government cannot afford to allow yet another molehill to grow into a mountain. 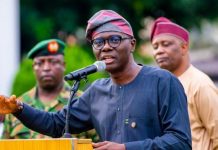