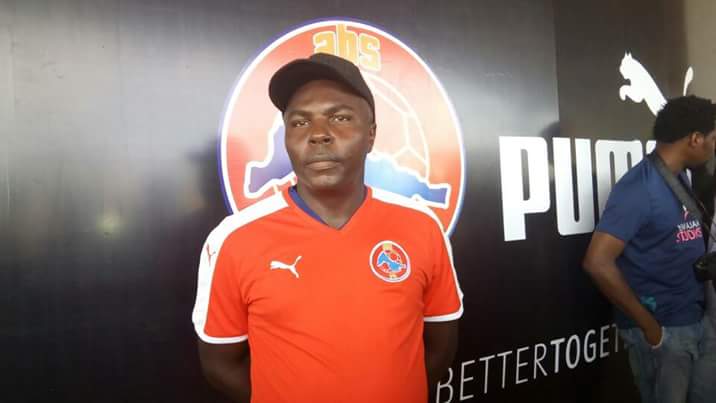 Quickly Tell us about your journey into the World of football?

Long journey I will say. But a head injury stopped me from playing after my secondary school. The rest is what you see on my cv. I used to play as a striker then.

You have a diploma in journalism and degree in Public administration, how has this helped to shape your current role in football?

Yes after my injury I quickly moved into administration by organizing local football and traders football competitions, in fact I was executive secretary of Igbo Traders football Association for 9yrs. It was during one of our championships that I wrote a press release for the event and distributed to journalists. One of the journalists and my mentor Bayour Issah saw the beautiful release and encouraged me to join journalism and since then I took to sport reporting till today having worked for different media house. The combination of journalism and administration became the needed tonic that brought me to where I am today.

And Masters in Public Administration?

Yes of course I have to acquire more formal knowledge in administration to boost my career and my school university of Ilorin impacted more than I wanted. Today am better by far, and the results are there to show

Nigerian League, what can you say about it’s growth?

Progressively better. The Nigeria league from my participant observation status has grown from what we used to know as local football  league to a full blown professional football league. And with Nigeria position in the world football calendar today, we can proudly say, we have done well. The parameters are there that our league has produced Quite a lot of players in the international scene, today many players and administrators can boldly claim the status of professionals as our league has created a platform for many participant to rely on it to earn a living.

The advent of LMC in  your own assessment, what has it brought to Nigerian Football as a whole?

Yes of course the coming of the LMC could best be described as a blessing, this is because before their arrival the league was in a state of near collapse and some Cabal were a clog on the wheel of its progress. The major achievement of the LMC at the initial stage was to expose the cabal and that led to the freedom and huge financial state of the league today. Before then clubs were paying idemnities and our revenue sources were being manipulated. But so far so good we thanked the LMC for their zeal and courage to dismantle the cabal.

Again you will agree with me that the LMC through a well thought out adoption of the EPL formular with corresponding domestication we were able to achieve the stability today. Kudos to mallam Shehu Dikko who saw reasons to work with the clubs to sign the all important document and agreement that brought us to where we are today.

So what do you think the LMC is doing differently that is contributing to the improvement of the league?

The LMC came with a clear cut intention to improve the commercial values of the league, improve on its brand to make it an attractive platform for investors to compete for as well as ensuring that proper structures are put in place for seamless proper administration of football and transparency even at the club level. And if you see what we have today you will agree with me that we are very much on course.

What would be your most outstanding contribution to the development of Nigerian Football?

Like the proverbial lizard, I will forever be greatful for my role and actions that have made me a personality in Nigeria football devoid of any negativity. While at Enyimba I was part of the success story, at Yobe desert stars we took the team to the elite league as well as the final of the FA. Cup in 2002. At ABS I took the club from Amateur to the premier League and the club is one of the best today in term of proper structure and best brand of football. At the National level I make bold to say that I was one of the pioneer members of the achievements of the LMC today via the club Owners, I was also a grassroot football developer., as a sports writer I was famous and I rose through the ranks to make an appreciable impact, today am a National officer of SWAN for many years. I have served as a member of the Ministerial committee that reformed the Referees, in fact I was the one that proposed the use of retired Ref as Referee assessors, just recently I was part of NFF committee that proposed the ongoing reformation of the NNL. Lots and lots more.

You talked about the LMC making the league attractive so as to woo sponsors. What do you think still scares indigenous businesses from investing in our local clubs?

What scares an average investor from venturing is when he/she is not comfortable with or not guaranteed of his investment. To attract them is simple, the word is proper structure and transparency. Today if you look at what the LMC is doing in terms of structure in administration as well as transparency , the environment is now conducive for investors to come and do business, and that has been witnessed with the  several partners that have shown interest in the NPFL. Today the LMC is instituted under the laws of Nigeria and under football laws and things are done In line with the provision of rules and extant laws. It’s accounts are publicly audited, so these are the foundation needed to boost investor confidence

Are we going to see more clubs hold AGM and give account to their shareholders?

Yes I was the acting secretary of the Club owners all through when The Baribote led board was Removed uptill the emergence of the LMC. My club was still there in the league until 2012/2013 season when we were relegated. And in my honour I resigned my position as the secretary of the Club Owners. But the 20 club members rejected my resignation and asked me to continue even when my club was in the NNL. I saw that as a challenge to continue to do well. In fact they went further to confirm me as the substantive executive secretary with a two tenure in office which is still on. That is a prove of confidence in my ability and service. I thank them.

Majority of our clubs are still being owned and controlled by the govt. So for now you cannot expect  them to be run as a full fledged professional side. The LMC is still working to see how most of these clubs could be transformed to community based clubs and operated as a professional side, and until such is achieved you won’t have the AGM stuff, but the LMC is on top of it via the restructuring.

Talking about welfare, Please tell  us If ABS payment record is up to date.

First at ABS, our payment is up to date. Secondly on the issue of Sunshine, I think what the LMC is doing is an intervention to see the league going. This is because there were a lot of discrepancies as regards Sunshine. The players signed an attestation form showing that they were not being owed. So how do you marry that with the backlog of salaries? So there is confusion. Even Sources in government claimed the money had been paid. So what do we believe?

What do you think about LMC taking over payment of players salary?

LMC did not engage players,  they are not clubs. They are league organizers. Moreover, the LMC has no financial capacity to pay players salary,  some clubs have a monthly wage bill of over 30 million,  so how will LMC pay such from the Club’s accrued Awards.

In Nigeria today virtually all the state govts own stadium, but commissioners and govs don’t play football, so the various stadia is for the clubs in such places to use. So in the interim what we need to do is to have a lease agreement with stadium owners to use the stadium and you pay, even as you can negotiate for a permanent take over too. We shall get there.

Recently the NNL Congress States that each club management will have a four year tenor, how will it work considering that most of these clubs are govt owned and the clubs management are political appointees?

Yes of course we all agreed with the LMC on the fixtures in oder to align with the international calendar and as I speak we are all working in that direction bearing the inconveniences of tight schedules.

What do you think about the expansion of Africa’s slots in the World Cup?

The proposed expansion of Africa slot at the World cup is a clear indication of the importance of Africa in international football and if the slot is increased, it will help improve our participation as well as our exposure and growth.

Your club just signed a deal with Puma recently, what’s the benefits to the club?

Yes,ABS  signed a five-year sponsorship deal with global sports branding outfit, Puma
The deal is part of Puma’s commitment to the growth and development of sports in Nigeria.
Puma, through its official franchisee in Nigeria, Persianas Retail Ltd, has  partnered with ABS FC to kit and sponsor the team for a period of five years. The deal was the first of its kind and represent the biggest football kit sponsorship in the history of the Nigerian football league.
The partnership will see ABS FC and Puma working together to expand the profile of Nigerian football over the course of this partnership.

Share this on WhatsApp
Related Topics:Abubakar Bukola Saraki (ABS) FCAlloy Chukwuemeka
Up Next

Nigerian By Blood, another nationality By Sports: 39 Nigerian Footballers doing well for other national teams