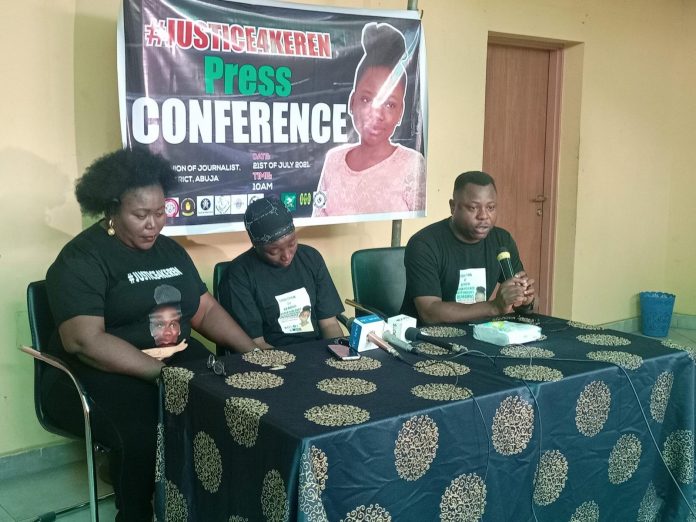 Acting Principal of Premier Academy in Lugbe area of Abuja, Chris Akinsowon, has described claims by Coalition of Gender Based Violence Responders that students of the school had sworn to an oath of secrecy on many issues, including the death of a 14-year-old SS1 student, Keren-Happuch Akpagher as blackmail and a deliberate attempt to conceal the truth.

Recall that the death of the 14-year old in June, 2021 in Abuja, had triggered controversy in the nation’s capital.

Akpagher reportedly died after a used condom, allegedly left inside her private part by unknown persons in school, was discovered by doctors, fuelling speculations that she might have been sexually molested.

Sources at Queens Hospital, Wuse Zone 6, where she eventually died, attributed her death to vaginal infection and sepsis.

Leader of the coalition Lemmy Ughegbe had laid the allegations against the school during a press conference held in Abuja on Thursday and attended by Keren-Happuch’s mother, Vivien Akpagher.

Ughegbe also alleged that a preliminary report of the autopsy conducted on the deceased by the doctor appointed by the police, Dr Desmond Okonkwo of the Maitama General Hospital, revealed that she was raped.

“How can secondary students take an oath of secrecy? This is nothing but blackmail and an attempt to divert the minds of the public from the truth,” he said.

Akinsowon maintained that the autopsy result had yet to come out, stressing that it was part of the investigation the school insisted must be done, adding that Premiere Academy was earnestly awaiting the result.

On the staff member of the school, who was allegedly sent on an indefinite suspension and later dismissed, Akinsowon said it was “based on careless talk with a student as part of our commitment to making the school safe for our students and earning the confidence of our parents.”

The acting Principal said in the event that any form of sexual assault happened to the deceased in the school and leading to her death, the management would join hands with all relevant security agencies to prosecute such a person in line with the laws of the land.