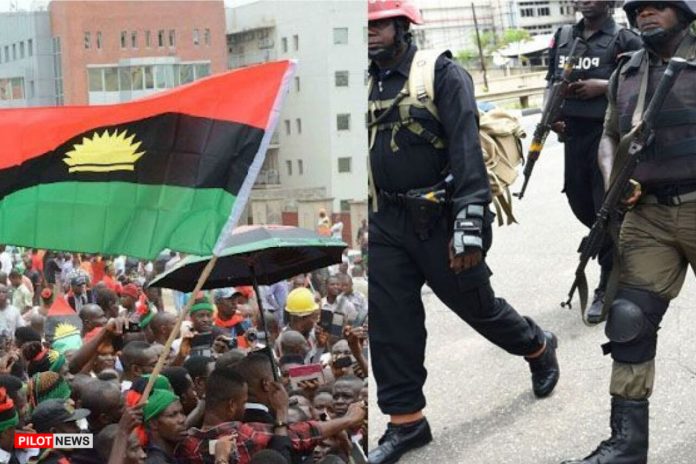 The police on Monday chased some members of the Indigenous People of Biafra (IPOB) who stormed the Federal High Court in Abuja for the trial of Nnamdi Kanu, their leader.

Aggrieved members of the group had stormed the court ahead of his trial.

A man dressed in black even addressed some pressmen but he spoke in Igbo language.

However, as their number increased, policemen stormed the place and chased them away.

Meanwhile, Justice Binta Nyako of an Abuja High Court has adjourned the trial of Nnamdi Kanu, embattled leader of the Indigenous People of Biafra following the failure of the Department of State Services (DSS) to produce him in court.

She said nothing could be done in the case in the absence of the defendant, who the lead prosecuting lawyer, Mohammed Abubakar, said was not in court owing to logistic reasons.

She promised to work with lawyers to the prosecution and defence and head of the security team to work out a plan to allow Ejiofor access to his client.

Ejiofor had complained that he has not been able to see his client for the past eight days.

He said he was informed yesterday that Kanu was moved from where he was being kept.

Justice Nyako then adjourned till October 21 but said the date could be brought back if the prosecution was able to obtain a fiat from the court’s Chief Judge to allow proceedings during the ongoing vacation of the court.