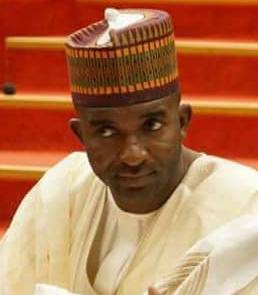 Share this on WhatsApp
Spread the love
By Kingsley Chukwuka
Concerned Adamawa youths has called on Nigerians to resist any attempt by fanatical Muslims to slide the country into a Muslim State.
They Group under the aegis of United Adamawa Youth Forum said it is now obvious that Muslims like Sen. Abdulaziz Murtala Nyako, a son of the former Governor of Adamawa State, are one of those behind the agenda of islamazing Nigeria.
Leader of the Group, Mr. Yakubu Danjuma who frowns at Nyako’s recent comments on Muslim Muslim ticket for the All Progressive Congress (APC), ahead of the 2023 governorship polls in the State, accused the former governor’s son for being behind the division in Adamawa..
Our correspondent reports that Sen. Abdulaziz Nyako had threatened Adamawa Christians of a Muslim Governor and Moslem deputy Governor just as obtained in Niger and Kaduna States, adding that Gombe State will be the next to follow.
It was also reported that the former Senator, Nyako is clamoring to govern the State in 2023, an ambition the Adamawa youths also viewed as impunity arguing that how can a son of a former governor also become a governor in the same State where there are people from diverse ethnic groups and religious beliefs.
“Does the Nyakos want to turn Adamawa as their dynasty?, we will resist this selfish moves from them”, Danjuma said.
He continued: Sen. Nyako is yet to return the N29 billion he stole from the Adamawa government when his father was the Governor. The Economic and Financial Crimes Commission (EFCC), has been on his trail and yet he wants to become governor.
“Instead of him to hide his face when Babachir Lawal, the former Secretary to the Government of the Federation pointed at the massacre which took place in 2017 and 2018 by Fulani terrorists in Numan LGA, a Christian dominated community, killing people in their numbers, he was shameless to respond to Lawal, as if we don’t know that his father’s farm was used to shield the Fulani assailants who perpetrated the attack”, the Group said.
Babachir Lawal in his recent article on the APC crisis in the State had sighted the massacre in the Bachama Kingdom of Numan LGA as possible indicator for the APC’s unpopularity in the region.
“There was a full blown guerilla war between the Bachama Kingdom (Christians) and Pastoralist aka Fulani Herdsmen (Moslims) which Christians viewed as being sponsored by the APC government both at National and sub-national levels”, Lawal had said.
Share this on WhatsApp
Related Topics:
Up Next