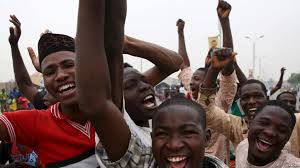 The defeat of the All Peoples Congress (APC) in the runoff presidential election has continued to be widely celebrated across the African continent.  Accordingly, African leaders have been pouring out congratulatory messages to the presidential candidate of the Opposition Sierra Leone Peoples Party (SLPP), a former military junta leader, Julius Maada Bio, who defeated Samura Wilson Kamara of the ruling All Peoples Congress (APC) in the March 31, 2018, runoff presidential poll.

Bio was sworn into office in Sierra Leone on Wednesday, April 4, 2018.

Congratulatory messages began to poor in on Wednesday and Thursday. President Muhammadu Buhari of Nigerian congratulated Bio and commended the people of Sierra Leone “on the successful conduct of the presidential election run-off as well as the parliamentary and local council elections held on March 7, 2018”.

President Buhari, in a statement urged all stakeholders in Sierra Leone to work together for the peace, security and development of the country.

He enjoined all those with grievances over the outcome of the elections to seek constitutional means of resolving them, stressing that nothing should be done to endanger the peace and stability of the country in particular and the sub-region in general.

The Nigerian leader saluted the resilient spirit of Sierra Leoneans, who have clearly demonstrated their ability to manage their own affairs and consolidate on the country’s progress after a post-conflict era. Other African leaders sent similar messages.

There are indications that Bio “now faces the difficult task of rebuilding the impoverished West African nation’s economy that was dragged down by the world’s deadliest Ebola epidemic and a global slump in commodity prices”.

Under the Sierra Leone People’s Party (SLPP), Maada Bio won 51.81 per cent of votes cast in the March 31 poll, according to results announced by the National Electoral Commission (NEC) on Wednesday. The former foreign affairs minister and ruling All People’s Congress (APC) candidate Samura Kamara, garnered 48.19 per cent of the votes cast.

According to the result announced by the Sierra Leone’s National Electoral Commission (NEC) on Wednesday in Freetown, Bio received 1,319,406 votes representing 51.81 per cent of the total valid votes cast, 2,546,577, to defeat the candidate of the ruling party.

The Chairman of NEC, Mr. Mohamed Conteh, who announced the result, said that the national turn out in the election was 2,578,271 representing 81.11 registered voters, while 31,694 invalid votes were recorded.

Mohamed Conteh had accordingly declared: “Therefore, in exercise of the powers conferred on me as National Returning Officer by sections 52(2) and 94(4) of the Public Elections Act, 2012 (Act No 4 of 20l2), I hereby certify that Bio Julius Manda having polled 1,319,406 of the valid votes cast in the March 31 Presidential election run-off has been duly elected President of the Republic of Sierra Leone.

“Any citizen of Sierra Leone who has lawfully voted in this election may challenge the validity of the said election of the President by petition to the Supreme Court of Sierra Leone, within seven days after the declaration of Presidential result pursuant to section 55(1) of the Public Elections Act, 2012 (Act No. 4 of 2012).”

Bio took office as Sierra Leone’s 5th President having won the run-off election with more than 92,000 vote margin against his APC counterpart.

Under Sierra Leone’s constitution, a winning candidate is sworn in once the Chief Electoral Officer certifies the results of the election, followed by official inauguration later.

It was gathered that 14 political parties participated in the first ballot which was conducted on March 7, 2018, where no candidate secured the mandatory 55 per cent of the total valid votes cast.

Kamara of APC at the first ballot came a close second with 1,082, 748 votes, representing 42.7 per cent of the total votes cast.

However, Kamara has declared he is not satisfied with the result, alleging irregularities and threatening legal battle with the emergent president. 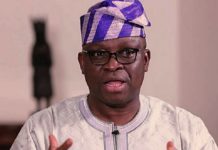