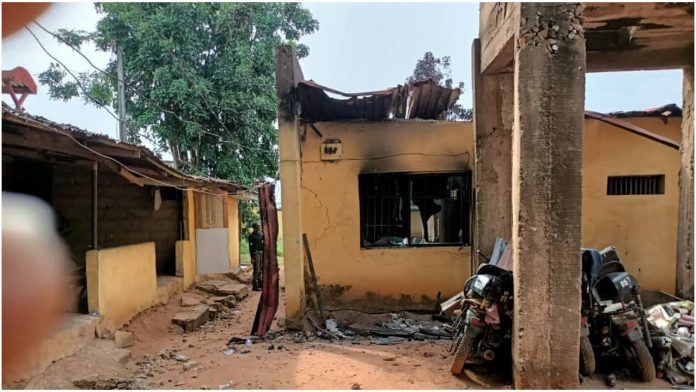 Less than twenty-four hours after gunmen killed seven policemen in several attacks in Rivers state, gunmen suspected to be members of the Indigenous People of Biafra (IPOB) have reportedly again killed another six policemen in Ini local government area of Akwa Ibom state.

The hoodlums also razed the Divisional Police Station at Odoro Ikpe, headquarters of the council area. The incident, it was gathered, occurred in the early hours of Saturday.

Ini is a sister local government to Ikono, which was also attacked last week during which three policemen were killed.

The Commissioner of Police, Eboka Friday, led members of his management team and tactical commanders to the respective scenes this morning for an on-the-spot assessment of the attacks.

In a press statement, the Police Command said none of the stations attacked was burnt. However, the command said it lost five assault rifles to the attackers.

SP Nnamdi Omoni, the Public Relations Officer of the Command said: “The incident which led to the death of seven policemen occurred last night at about 2030hrs, where unknown gunmen driving in two branded Hilux vans, attacked the special checkpoint at Choba bridge, where in a surprised attack, killed two Policemen on duty and set ablaze a private car belonging to one of the Policemen.

“A similar attack was launched at Rumuji Police Station by the same hoodlums who killed two Policemen on duty and burnt a Police patrol vehicle.

“However, a stiff resistance by the Police prevented the hoodlums from gaining access into the Police station. In the course of exchange of fire, two of the attackers were fatally wounded and died on the spot. The third attack at Elimgbu Police Station was equally resisted by the Police, though three officers were killed in that attack.