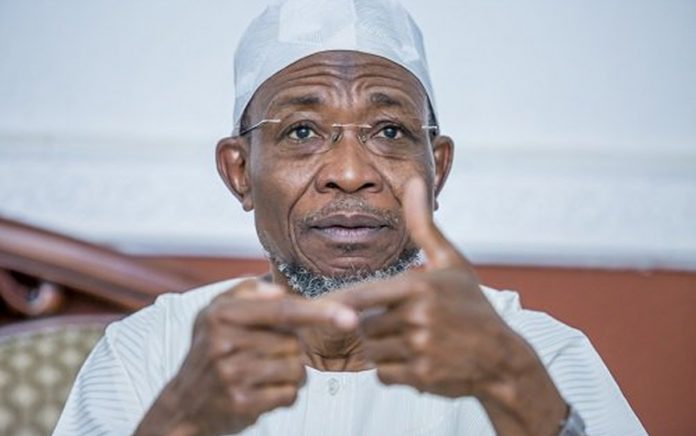 The Minister of Interior, Ogbeni Rauf Aregbesola, has urged the Nigeria Correctional Service (NCoS) to track and recapture all escaped inmates.

This is contained in a statement issued by the media Adviser to the minister, Mr Sola Fasure, in Abuja.

Aregbesola made the call at the opening of a two-day retreat for senior management of the service in Sokoto State.

He said the strategies and deliberations at the retreat should be centered around solutions on recapturing all escaped inmates to safeguard communities who might become prey to criminal activities of escaped inmates.

The minister expressed displeasure over the negative impact of the #EndSARS protests which later turned violent leading to attacks of custodial facilities hence rise on the attacks of facilities.

”Retreats are for bonding, contemplating purpose and setting future goals.

“Therefore, the major issue that must be considered during this retreat is the de-congestion of custodial facilities,” he said.

He recalled that during the outbreak of the COVID-19 pandemic, one of the policies, quickly put in place then was the de-congestion programme under which thousands of inmates were released on compassionate ground.

“The follow up to that is the consideration that we should find further ways to keep de-congesting our facilities.

“We started work on the idea of compiling the list of convicted inmates serving light terms for not too serious offences, who were in custody because they could not pay their fines.”

Aregbesola commended the service for being able to manage the centres during the pandemic without recording a single infection.

He added that the agency did a good job of keeping the virus away and must continue to keep the facilities safe and sound from inside and outside.

The minister urged that as the officers deliberate, strategise and set target for the next five years, it must ensure that the bio-data of all inmates were harmonised with sister agencies

This, he said, such as the Nigeria Financial Unit (NFIU), all banks and the INTERPOL to track all escaped inmates.

“It is also very important to have their fingerprints, pictures and other details you have with you to be harmonised with them.”

In his remarks, the Controller-General of the service, Haliru Nababa, said that the retreat would afford the hierarchy of the agency the opportunity to restrategise and bond towards efficiency in service delivery.

Nababa added that the retreat would also serve to provide clear perception on set targets of the service.

The C-G said the current capacity of the 244 custodial facilities in the country stood at 58,278 as against the population of 75,000 inmates it now holds.

This, he said, led to the congestion of inmates, worsened by recent incessant attacks which were externally organised and executed.

“Drawing from the above, the NCoS has taken measures that will forestall future attack such as the formation and activation of the Rapid Response Team (RRT).

“Initiate more intelligence sharing with other security agencies, the sensitisation and encouragement of State Governments to implement non-custodial measures.

“As well as the scaling up of the capacity of Armed Squad and Intelligence personnel on the use of high calibre weaponry and intelligence gathering.”

Earlier, declaring the retreat open, Gov. Aminu Tambuwal of Sokoto State, said that his government would continue to support the service in achieving its goal of reforming and rehabilitating its inmate.

“As a government, we will continue to support you in your role as one of the critical operators in the administration of criminal justice system.

“The role of reforming and rehabilitating inmates cannot be overemphasised to have a crime free society.

“I wish you a successful deliberations and on behalf of the Governor, I hereby declare this retreat open,” the governor stated.

The governor was represented by his Deputy, Alhaji Manir Dan’iya.

The News Agency of Nigeria reports that in November 2021, Aregbesola said about 3,906 inmates who escaped during recent attacks on correctional centres were still at large.

The Minister of Interior, Rauf Aregbesola made this known during a media briefing organised by the Presidential Communication Media Team in Aso Rock, Abuja.

The Minister said about 4,369 inmates escaped from the centres from 2020, following attacks by gunmen, adding that only 984 had been rearrested.

NAN reports that the federal government said the bometrics of all custodial inmates in the country had been taken while working with the International Police (INTERPOL).

Aregbesola said: “How long can they continue to run from the state? The state is a patient bird. You can run but you can never hide.

“We have their biometrics. Whenever and wherever they appear to transact any business, their cover will be blown.”