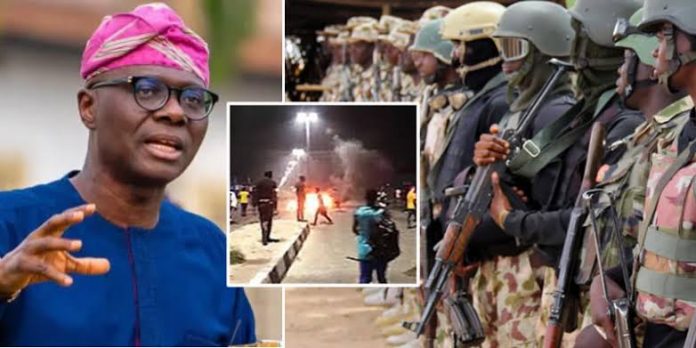 The Nigerian Army, at last, admitted deploying soldiers to the Lekki toll gate, Lagos, on the widely acknowledged Black Monday, October 20, 2020, where soldiers were reported to have rained bullets on the unarmed peaceful #EndSARS protesters.

The Acting Deputy Director of the 81 Division of the Nigerian Army, Major Osoba Olaniyi, in a statement, explained that the involvement of soldiers was necessitated by the violence perpetrated by thugs who hijacked the peaceful protests of Nigerian youths, burning police stations, killing policemen and releasing suspects in police custody, including carting away weapons from attacked police stations.

The statement indicated in the midst of the mayhem, the “Lagos State Government requested for the military to intervene in order to restore normalcy,” saying that “the military followed all laid down procedures for internal security operations”.

The Army maintained that the Lagos State Government sent an invitation to the military after Governor Sanwo-Olu proclaimed 24-hour curfew in the state.

The Acting Director of the Division reiterated that at no time did soldiers open fire on the unarmed civilians, insisting that the viral video on social media, showing shooting or killing of  civilians by the army is untrue, noting that it is a plot  to cause anarchy in the country.

The spokesperson of the Defence Headquarters, Major-General John Enenche, had at a press briefing on Tuesday last week, debunked that military personnel were at the scene of the shooting at the Lekki toll plaza. He had insisted that the trending videos on the shooting in which soldiers were sighted could be photoshops.

Governor Babajide Sanwo-Olu of Lagos State in an interaction with CNN on Tuesday, acknowledged that soldiers were involved on the shooting of unarmed protesters at the Lekki gate, adding that the footage from the scene indicated so. Though, Sanwo-Olu denied that anyone died or that dead bodies were immediately carried away by the soldiers. He stated no one has yet made any claim that a relative who was at the scene of the shooting on the 20th of October is missing.

Sanwo-Olu had earlier denied any knowledge of who deployed the army to the shooting scene.