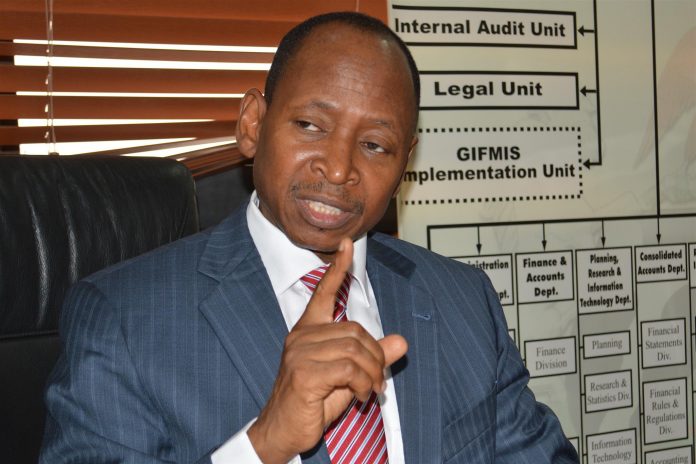 The office of Auditor-General of Nigeria (AGN), says over N57.62 billion federal government grants and contributions given in 2017 could not be accounted for, beaming its search light on the operations of the Accountant General of the Federation, Ahmed Idris.

In a report by the AGN, Anthony Ayine, the office queried that Idris had failed to provide details of the disbursement for the grants and contributions, which was given by FG to domestic and foreign governments, public and privately-owned companies, academic institutions and international agencies.

It was disclosed that the office of the Auditor-General didn’t receive breakdown and details of the grants and contributions, and when Idris was directed to submit beneficiaries of grants and contributions for the 2017 fiscal period, he promised to make the list available by March 18, 2019. However, he is yet to fulfil the promise as of the time the audit report was prepared.

According to Ayine, non-disclosure of the details cast doubt on the usage of the grants and contributions.

“The budgetary provision for grants and contribution was not disclosed in the notes to the accounts. The sum of N57,624,929,461.05 was granted by the Federal Government of Nigeria as grants and contribution which represent transfers to domestic and foreign governments, public and private-owned companies, academic institutions and internationals for 2017.

The allegations of financial infraction against Idris is one of many financial lapses detected by the office of the Auditor-General. Several Ministries, Departments and Agencies of government have been queried for financial infractions such as irregular expenditures to failure to surrender surplus revenues to the Treasury, all running into billions of naira.

Some of the MDAs caught in this web include the Ministry of Justice which was accused of disbursing N10.4 billion without following due process. Officials of the ministry were also said to have spent N32.5 million on foreign travels without approval.

Also, Ayine had called for the probe of the management of the Nigerian Port Authority (NPA) over irregularities observed in a N7.5 billion contract for Shore Erosion Control Work at Akipelai, Ayakoro and Otuoke towns in Bayelsa State.

This action, according to Ayine, breaches the International Public Sector Accounting Standards.