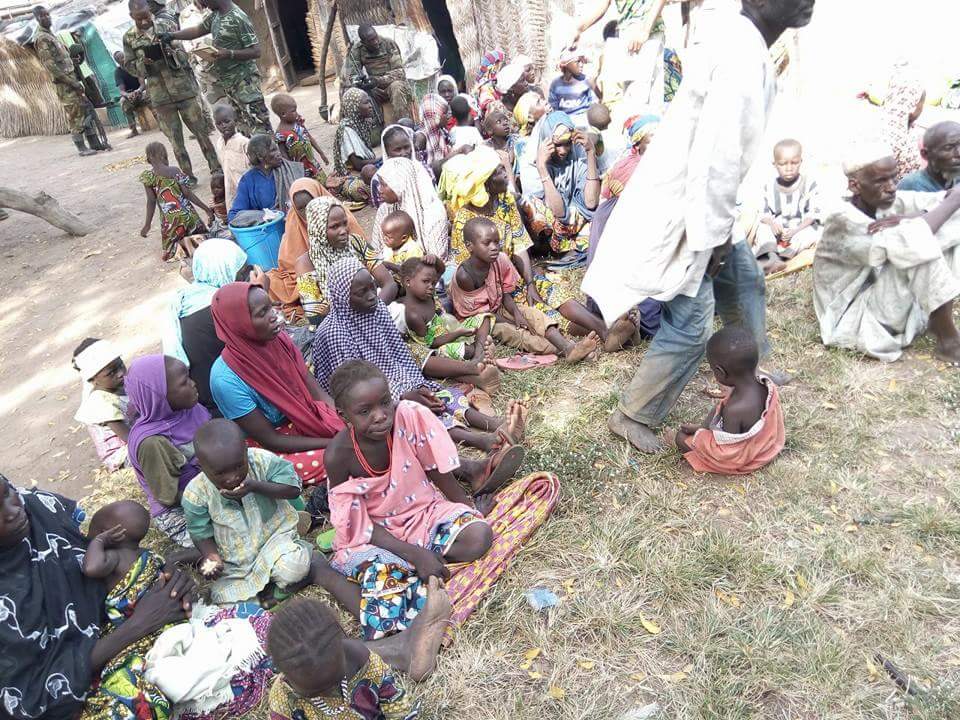 “In near future the World will suffer above all from distrust.”-Le Comte Du Nouy.

It was from Mr. Yomi Odunuga’s social media page that I got the first impression of the return of adverse malnutrition of children of the North East States of Yobe, Borno, Adamawa, and Taraba whose ancestral homes have been destroyed by the four year old rebellions by the dreaded armed Islamists known as Boko Haram.

The last time these human catastrophy happened in Nigeria’s recorded history was during the Nigeria /Biafra war in the later part of  1960’s when the then Federal forces imposed an inhumane food blockades against the then Biafran Republic made up of the old Eastern Region.

This diabolical policy led to massive malnutrition of children known as Kwashokor in which over 3 million Children were left to die.

Mr. Odunuga who is a senior editor of one of Nigeria’s national newspaper was simply calling attention to the plight of these unfortunate children in the North East and I think he also posted photos of the humanitarian work of some Nigerian celebrities.

These Nigerians have out of their own choosing mobilized resources and relief materials to render the life saving interventions in favor of these hundreds –of-thousands of Nigerian children in the North East threatened by death from severe malnutrition similar to the Kwashokor phenomenon aforementioned.

The issues around the grave cases of severe malnutrition of the children of North East of Nigeria have indeed attracted the attention of the international community.

Such global watch dogs such as the United Nations Agency for Children (UNICEF );  Food and Agricultural Organization ( FAO) and some reputable United Kingdom’s based print media have already published extensive research materials on the increasing cases of malnutrition of these internally displaced children.

Particularly, the British tabloid known as Telegraph even wrote a series of well articulated pieces highlighting the alleged diversions of relief materials donated by their home government which were for the use of the internally displaced persons in the affected and devastated communities in the North East stolen by government officials.

The Presidency saw and interpreted the allegations from a different perspective.

Even whilst the Presidency has disagreed openly with the foreign publication, a Senator representing the people of much of Borno South Mr. Ali Ndume openly accused the government contractor of diverting over fifty percent of grains from Nigeria’s strategic grains reserves.

The President, Muhammadu Buhari had ordered the grains to be directly distributed to the internally displaced and severely malnourished persons of the North East but officials of government connived with contractors to steal them.

He (Ndume) hinted that the said contractor has already been arrested by theEconomic and Financial Crimes Commission (EFCC) and has started singing like a bird from the EFCC’s cell. The theft of relief materials belonging to internally displaced persons is massive so it’s not just a contractor that has diverted them.

There is surely a sophisticated syndicate deeply entrenched in those regional government. Let EFCC or whatever is the relevant law enforcement agency should go deeper than this shadow chasing and government magic.

We will scientifically peruse the detailed presentation of the specific global bodies namely- UNICEF and FAO which understandably raised alarm of greater hunger in the North East should government and other stakeholders not implement concrete measure to ameliorate this unfortunate phenomenon.

On July 19th 2016, the United Nations Children Fund (UNICEF) issued a warning about the imminent demise from malnutrition of over a quarter of a million children in Borno State alone if no concrete steps are adopted by the Nigerian State to mitigate this coming tragedy of epic proportion.

UNICEF warned thus: “An estimated quarter of a million children in Borno state, North-East Nigeria, face severe malnourishment and risk death, UNICEF said today, as the scale of the humanitarian crisis caused by the Boko Haram emergency continues to unfold.

It stated that as more areas in the northeast become accessible to humanitarian assistance, the extent of the nutrition crisis affecting children is becoming even more apparent.

The UN children’s agency urges all partners to join the humanitarian response and donors to urgently provide resources.

Out of the 244,000 children suffering from severe acute malnutrition in Borno this year, an estimated 49,000 children – almost 1 in 5 – will die if they are not reached with treatment.

“Some 134 children on average will die every day from causes linked to acute malnutrition if the response is not scaled up quickly,” said Manuel Fontaine, UNICEF Regional Director for Western and Central Africa, who just returned from a visit to Borno state. “We need all partners and donors to step forward to prevent any more children from dying. No one can take on a crisis of this scale alone.”

“There are 2 million people we are still not able to reach in Borno state, which means that the true scope of this crisis has yet to be revealed to the world,” Fontaine said. “There are organizations on the ground doing great work, but none of us are able to work at the scale and quality that we need. We must all scale up.”

UNICEF is working with partners to screen and treat children for malnutrition and improve access to water and sanitation. UNICEF’s humanitarian response also includes providing medical care, immunization, education and psychological support to the children affected by the violence.

In early 2016, UNICEF appealed for $55.5 million to respond to the humanitarian crisis in north-east Nigeria, but has so far only received $23 million – 41 percent. As the children’s agency gains access to new areas with vast humanitarian needs in the coming weeks, it expects the appeal to increase significantly.

On its part, the Rome based Food and Agricultural Organization had as far back as year 2013 also raised alarms of the larger crisis of imminent food insecurity in Northern Nigeria generally.

In the online release signed by Peter Lowery of the information department of the global body FAO said: “Poor families have used up their food stocks and are facing high food prices awaiting the next harvest.”

“Of particular concern is the food security situation in Northern Nigeria where price for coarse grains such as sorghum, millet and maize continue to increase.”

The nutritional status of children under five also remains worrisome with a continuing high prevalence of acute malnutrition.

Admissions of nutritional rehabilitation centers are close to 2012 levels, particularly in Nigeria.

Over 1.4 million children are at the imminent risk of severe malnutrition in much of North East with the terror attacks undertaken by the armed Islamists who do not only attack strategic government institutions but has over time sacked farming communities and destroyed crops and other farming resources. Farm produce have often been looted too.

But the impunity of seeing government officials or government appointed contractors embarks on widespread theft of relief materials to their shops for resale to buyers is a serious crime against humanity.

The Nigerian State must order for investigation so the culprits are arrested, prosecuted professionally and sanctioned by the competent court of law.

The state officials must not claim any immunity to steal or divert relief materials meant for these indigent Nigerians. This is not only criminal but satanic.

What other way do we need to notice this unpardonable impunity than in watching the Senator as he sincerely laments the theft by the contractor of such huge amounts of the much needed grains.

He said that the contractor who diverted 60 trucks of grains allocated by President Buhari for the Internally Displaced Persons in Borno state has been arrested.

This was revealed by Senator Ali Ndume, who also said the Economic and Financial Crimes Commission (EFCC) is investigating the matter.

The grains were sent to the IDPs by Mr. President to fight the increasing rate of malnutrition in most of the camps.

Ndume, who expressed shock at the incident, said he was asked by Buhari to monitor the distribution of the grains by officials of the National Emergency Management Agency (NEMA).

The lawmaker also revealed that the IDPs from Borno who are living in various camps will soon be assisted to return home.

Ndume said “I have told them (IDPs) in clear terms that time is ripe for them to go back home; there is no point remaining in the camp after three years.

Gwoza Local Government Area, where I hail from, in particular, is now safe and secured. Over 10,000 residents are now living safely in Gwoza and there is no cause for alarm. It is very regretful that less than 3,000 Gwoza IDPs now in Maiduguri have refused to go back and resettle, despite all pleas to them.”

Apart from these issues of criminality in stealing foods belonging to these babies and internally displaced persons, most Nigerians are appealing to government to transparently administer the North East victims of terrorism Trust Fund which was set up by the then President Goodluck Jonathan and a committee headed by retired General Theophilus Danjuma.

The renewed mandate to that Presidential Committee headed by General Danjuma (rtd) granted by  the current President has made it even more compelling for Nigerians to keep  clamoring for the direct material and logistical interventions to reach the victims of terrorism in the North East.

In carrying  out the disbursements of these material and logistical reliefs to the victims of terrorism the Nigerian government must note that the victims cuts across Ethno-religious affiliations because these victims  included  Nigerians from other ethnic groups who hitherto lived in the north East but who lost everything to terror attacks.