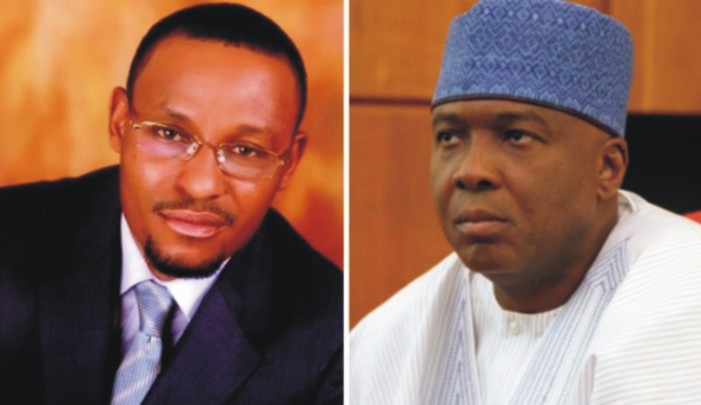 Justice Dalandi Umar dismissed a motion one of Sen. President Bukola Saraki’s lawyers raised Thursday, and asked police to flank the lawyer out of the CCT but for intervention of prosecution’s lead counsel who pleaded for calm.

In the motion, Raphael Oluwole, who was appearing for the second time on behalf of Saraki’s defence team leader Kanu Agabi, asked Justice Umar to disqualify himself from the panel.

After prosecution lawyer Rotimi Jacobs interrupted the motion, the CCT chair ruled against it.

“That motion as far as the tribunal is concerned is of no consequence; not worthy to be entertained and is hereby thrown away,” said Mr. Umar.

Not done yet, Oluyede got somewhat wrought up, and began to argue with Umar who had to order the policemen to usher him out of the court.

Jacobs, however, pleaded with Umar on behalf of his colleague.

Thursday marked the fourth day of the criminal trial of the No 3 citizen alleged to have falsely declared his assets when he governed Kwara for eight years.

Series of similar applications to stall the trial and buy time have been moved by his defence team numbering 80 since the tribunal opened last September.

The Code of Conduct Bureau is prosecuting Saraki for a 13-count charge of anticipatory asset declaration.

All of Saraki’s attempts to halt the trial have been going down like lead balloon since the Supreme Court ordered him to submit himself for the trial.