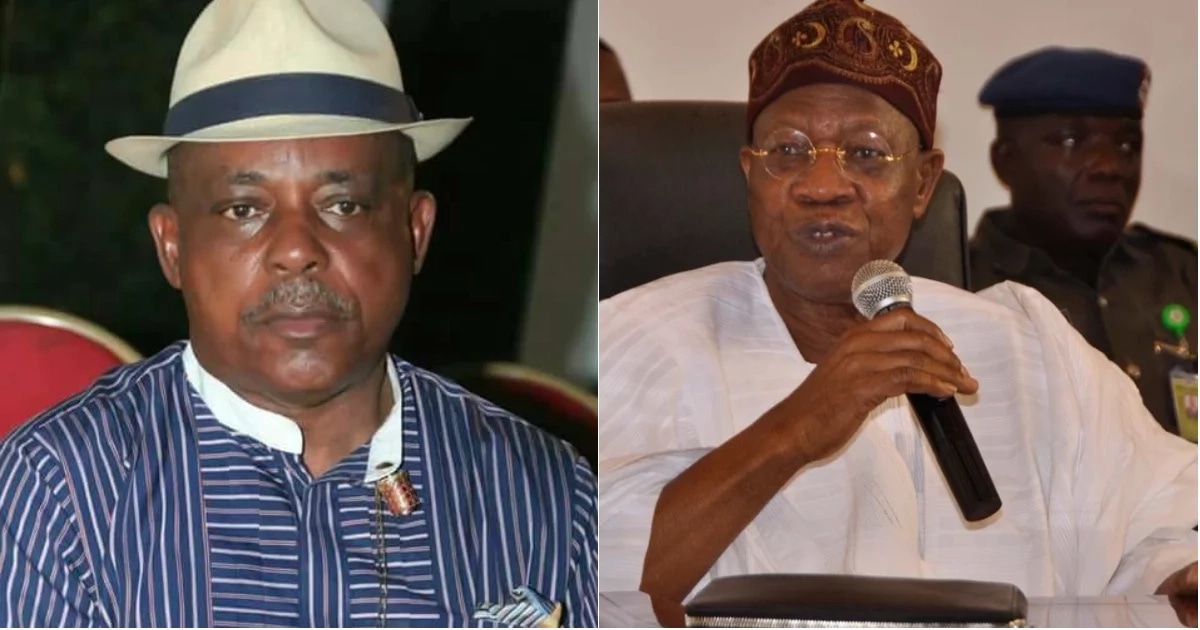 The National Chairman of the Peoples Democratic Party (PDP), Prince Uche Secondus, on Thursday floored the Minister of Information and Culture, Alhaji Lai Mohammed, the Federal Government of Nigeria, and the Nation Newspaper, in a libel suit on false information published against him, National Daily reports.

The PDP National Chairman had challenged the inclusion of his name on a list of looters published by the Nigerian government in 2018 in the court of law. He had demanded retraction of the publication, apology, and payment of N1.5 billion damages in the suit.

In the libel suit – Suit No: PHC/1013/2018 – Prince Uche Secondus Vs. Alhaji Lai Mohammed & 2 Ors. – filed by Echezona C. Etiaba SAN, the lead Counsel to Uche Secondus, on the 6th of April 2018, monitored by National Daily, the PDP national chairman sought a declaration that the publication made by the Defendant’s against the Claimant (the subject matter of this suit is defamatory).

The lead Counsel also demanded an order of the Court directing the Defendants, Lai Mohammed, the federal government, and the Nation newspaper, to retract the said publication and apologize in writing to Uche Secondus, the Claimant, for the Defamatory publication.

Etiaba further asked the court for an order of the Court directing the Defendants to publish the retraction and the written apology in all the news and social media including but not limited to The Nations Newspaper, ThisDay Newspaper, Sun Newspaper, The Guardian Newspaper, Punch Newspaper, Nigerian Television Authority, Channels Television, amongst others, where the defamatory materials were published against the PDP National Chairman.

Secondus also sought an order of perpetual injunction restraining the Defendants, their Agents, and privies from further publishing the Defamatory publication against the Claimant.

The PDP national Chairman, thereafter, demanded the sum of N1,500,000,000.00 (one billion, five hundred million naira) only for general damages for humiliation, castigation, verification, attack of his person and integrity by the defamatory publication.

The plaintiff had earlier argued that the false publication had made him look like a thief to his friends, associates, bringing shame to his person and family.

The Counsel also requested the court for the cost of the suit; and for such further or order or other orders as the court may seem fit to make in the circumstances of the case.

The presiding Judge, Hon. Justice A. I. Iyayi-Lamikanra, of the High Court of Rivers State, Port Harcourt Division, in a judgement on Thursday, obtained by National Daily, on the Suit No: PHC/1013/2018 – Prince Uche Secondus Vs. Alhaji Lai Mohammed & 2 Ors., granted all the reliefs sought by the PDP National Chairman, Uche Secondus, against the Information Minister, Lai Mohammed, the federal government and the Nation newspaper. The judge noted that the Claimant by a writ of summons filed the suit on the 6th of April 2018.

The presiding Judge, Hon. Justice A. I. Iyayi-Lamikanra, in the judgement ordered that the Claimant’s case has succeeded, stating that Lai Mohammed, the federal government and the Nation newspaper, the Defendants, are jointly and severally liable for the libelous publication made against Secondus, the Claimant.

Iyayi-Lamikanra directed that the 1st, 2nd and 3rd Defendants shall publish a written apology in favour of the Claimant in the newspaper of the 3rd Defendant, which is the Nation.

The Judge, therefore, granted an Order of injunction restraining the Defendants whether by themselves, agents, or privies from further publishing defamatory statements against the Claimant.

The Judge ordered that Lai Mohammed, the federal government and the Nation newspaper, the Defendants, should pay the sum of N20 million to Uche Secondus, the Claimant, as cost.

National Daily recalled that after some exchange of correspondence with SERAP on the publication of a list of looters from who the federal government claimed money were recovered from, the government in a list released by the Minister of Information and Culture, Lai Mohammed, included the name of the PDP National Chairman, Uche Secondus, on a list widely published in the country.

Secondus had protested the inclusion of his name on the looters list, accusing the All Progressives Congress (APC) government of hunting opposition.

Meanwhile, it is not certain if the Minister, the federal government and the Nation newspaper would appeal the judgment.